A mild, cloudy day with the odd brighter spell and a moderate wind from the North West, it was also three days after the full moon. These are pretty good conditions to be fishing just about anywhere and “Eden” in particular. By 0700 I was anchored up in the basin area, arranging a delicious menu of deadbaits which were spread around the boat. I’d only just finished and was starting to mix up a load of foul smelling fishy groundbait when I was startled by a ticking bait runner. I quickly picked up the rod, baited with Mackerel once again, and wound into a Pike. The fish was on and didn’t feel big but I’ll never know as the hooks pulled out after a few seconds, bugger!!!! I was disappointed but not as gutted as I had been a few weeks ago. I was sure I’d get another chance, wouldn’t I?

I stayed in this area for another ninety minutes then moved another 100 yards to the south. The wind was ideal for drifting so I set one rod up shallower and drifted a smelt deadbait a few inches off the bottom. The bait was rigged head up trace and at the end of the drift was retrieved slowly, sink and draw style. This method has caught me a few fish over the years…but not today. I moved into ‘The bay’ using the same methods I searched three different areas here without reward. I then moved back into the basin and tried two more spots here, nothing. I worked hard, fished hard but didn’t find any more Pike willing to pick up a bait. By this time I was cursing my missed chance first thing in the morning. 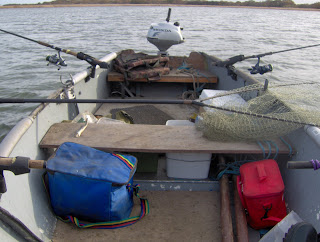 Another blank session, my second in a row at Eden but I can console myself that at least I’ve found a fish willing to pick a bait up on both these trips. On this system that is pretty good going! I can remember the first winter I spent searching the system, I fished it a dozen times and boated a grand total of four Pike for my troubles! Back then we fished more in hope than expectation, every Pike caught was a major event, no matter how big or small. Nowadays I launch the boat expecting to catch something, we’ve come a long way. Once again I totally enjoyed every minute spent afloat in this wild natural environment, I didn’t speak to another soul all day and my only company was the birds, in fact there was only one thing missing - Pike! Sadly due to work, family and other commitments it will be a few weeks before I’m able to visit Eden again and I’m missing it already.

The unwelcome bleep of the alarm clock woke me around 6 am after too little sleep. I felt rough as guts and dog tired but what the hell, it’s the weekend and there was a small window of opportunity into which I could squeeze a few hours fishing. I staggered out of bed and went through the familiar motions of boiling the kettle and filling the flask etc. Isn’t it strange how, the harder I try to be quiet, the more racket I actually end up making? Is it just me?

An hour later I was settled in soaking three deadbaits at my favourite quiet corner on “The big one”. Conditions looked pretty good with a brisk southerly wind and broken cloud. There were fry dimpling the surface in the margins, Grebes feeding in the open water and the occasional Bream rolling at range. All that was missing was Pike. Most times I fish for Pike, I’m thinking, and trying different things all day, attempting to catch another fish. Here I am content to sit and relax, knowing that I have good bait in an area that the Pike like to be. I enjoyed three hours of peace and quiet, hidden from the cyclists and ramblers although the occasional inquisitive dog gave me a look, thankfully their owners were oblivious to my presence. I’m not anti social, honest! Apart from that my company was the birdlife, I’m no bird watcher but I enjoy counting the species and got up to fifteen with ease.

My fix of fishing gave me time to breath in the fresh air, clear my head and contemplate what is right and wrong in the world. Britain has a new (Black) World champion in Motor Racing, Go Lewis! The great (and highly UNDER rated) Joe Calzaghe is still world champion and probably the best boxer in the world. The mighty Ipswich Town FC are on a run of wins and climbing the table. The Australian cricket team is on the verge of defeat, the first of many over the next twelve months! Across the water there is a new (Black!!) president thank God! He might not change the world but he can’t be worse than the last one! It seems to me that the election in the States affects the British people more than our own elections, sad but true. Of course today is remembrance Sunday and sadly there are still armies trading bullets in the world.

All too soon my time was up and I had to return to my all too hectic reality. Unfortunately the Pike stayed away this morning but it was three hours well spent anyway. In years gone by the onset of winter proper saw the fishing become very difficult on this water, to the point where we fished other, easier waters instead. It could be nearly that time once again but who knows. I do have another local water up my sleeve for when the winter arrives but before then…Eden.
Posted by Michael Hastings at 14:59 No comments:

Today I made my third visit to Eden in eight days and I was joined by my nephew Josh and my friend Richard who was to fish from his own boat. It was a cold start to the day as once again I had to scrape ice off the windscreen. We had an uneventful journey but were buzzing and full of confidence. Not only was I coming off the back of a good session but Richard had had a superb day on the Wednesday taking six fish including big doubles of 15, 16 and 17 pounds. Richard and I were hoping for more of the same but for Josh it was his first ever visit to the Eden and any Pike would be a good Pike.

For Josh and I our first port of call was “The bay” whilst Richard motored off to fish an area we call “Ghost Town”. We sat it out for ninety minutes or so, the water was flat calm and I had no confidence so we upped the mudweights and made our own way to the Ghost town. By ten o clock we were fishing with deadbaits scattered about. This was the same spot from which I caught my first ever Pike from the system a few years ago. We spent an hour here then a further sixty minutes fishing close to the now sunken island. The day was bright and clear and the water was mostly rippled but when the wind dropped it fell flat calm and it was hard to feel confident. It was nice to be on “Ghost Town” again, it is the most atmospheric of Pike fisheries but it is very difficult. At the moment I really wonder if its even worth fishing at all. Richard did manage a fish on Bluey but it was small, not one of the monsters we dream about 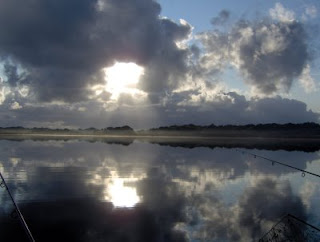 Why would anyone want to fish a dump like this?

By 1240 we were back fishing in the basin, close to where I’d taken those fish on Tuesday, Richard had also moved back into the area and was fishing nearby. After ninety minutes we moved a couple of hundred yards to fish the far side of the basin. Confidence was slowly ebbing away but surely we’ll find a Pike or two here? Twenty minutes later Josh finally had a take on Lamprey. He set the hooks into a nice fish and expertly played it to the boat where I did the honours with the net. I guessed it at around ten pounds, not only was this Josh’s first Pike from the Eden system but his first double figure Pike from anywhere. I was very pleased for him and he was elated! At last a Pike in the boat, now would it be my turn?

Half an hour later it was decision time, should we make one final move for the day or should we stay put. The decision was made for us by another take to Josh. This time he christened a new Pike rod with a lean fish of around eight pounds, his second biggest Pike. Unfortunately the rest of the afternoon was uneventful, despite fishing well into dark, apart from one small fish to Richard at dusk. In hindsight we should have moved after Josh’s second fish but it’s hard to move when you’ve just caught a fish. Josh, well pleased with his biggest Pike!
I was really pleased for Josh to have caught a new PB Pike but had felt disappointed not to have caught myself. I could console myself with the thought that I’d put the boat on the spot for Josh to catch his. Here I have something of a moral dilemma. I was very pleased that Josh had caught his personal best Pike but how would I have felt had he pulled out the big grandmother fish that we dream of? These fish are there and once on the water, my boat partner has as good a chance of catching as me. If Richard latches onto a huge Pike from Eden, I’ll be envious but delighted for him as I know just what it would mean to him and I know how much effort he’s put into fishing the system. I know I wouldn’t feel the same way about a “part timer” getting lucky. One thing is for sure, I always choose my fishing partners carefully!
We followed Richard’s boat back in the pitch black for a pleasingly simple journey for a change. On the long drive home we chatted about the system and agreed that the Pike would be now well and truly on the move. Some areas would become devoid of fish whilst others would have an influx of wanderers. We hoped we could stay on to of the fish movement and keep catching.