Another late start and a tedious journey north through sleety, shitty weather. When's it all going to end? I'm sick and tired of scraping the car windscreen, fed up with snow, ice, sub zero temperatures and slippery roads. It's crappy fishing weather so why bother? I've answered that one before. The journey was brightened by playing Happy Mondays very loud and trying to fathom Ryder's lyrics;

“I can do tricks I can
I'm like a dog with two dicks I am
why don't you tie me to a tree
and have another cup of Typhoo tea?”

My moan of the morning is why the hell do people take the piss and risk their lives over taking on bendy single carriageway roads? Giles & I nearly copped it last winter when some idiot was in a hurry and a work mate had a nasty experience the other day. Today I witnessed more madness but thankfully it didn't end in tears.

Once again it was mid morning before I was anchored up and fishing but I didn't feel I'd missed out on a lot by not having the early morning start in these cold conditions; however I wasn't here so I'll never know. There were three other boats about, two were close to areas I fancied so I ended up fishing what has become my normal starting point over the last couple of trips. I made a pigs ear of anchoring the boat and ended up side on to the wind but it wasn't too strong and this enabled me to get a good spread of baits. Three were fished downwind, while a fourth was cast upwind towards the reeds. The plan was the same as last time out, cold weather the fish won't be moving much. Keep the baits on the move, recast regularly and twitch baits, try to put one close enough to a Pike that she won't be able to ignore it.

The morning was quiet, in fact it was so quiet I took to listening to the sounds of birds. Above the racket made by the ever present gulls I could hear a Woodpecker tapping away, the unmistakable squawk of a Pheasant and a grumpy Heron sounding like a rusty door hinge. I spent ninety minutes in the first spot before pulling up the weights and heading for 'submarine bay', an area I hadn't fished for quite some time. I cast two rods upwind into open water and two more downwind towards the reeds then made myself comfortable just before a blizzard descended. This was my first experience of fishing in such conditions from an open boat and it wasn't the most pleasant part of the day by far. Soon it passed and a weak winter sun peaked through the clouds. I was treated to the sight of a Bittern taking wing, flying across the bay and vanishing amongst the reeds opposite. This is also a spot where the Harriers are guaranteed to come close, whispering death gliding silently overhead. 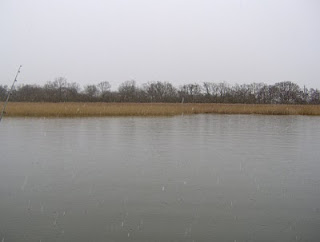 Snow
As the afternoon drew on the sky was mostly cloudy. Where do I fish next? All I could do was recall places that had produced at this time of year in seasons gone by. But surely in a more 'normal' winter the Pike would have spawning on their minds by now? My third stop was uneventful fish wise. I sat enjoying a little winter sun, watching filthy grey clouds passing harmlessly by to the east. I should have known better. From nowhere the wind strengthened and veered to an easterly, bringing the clouds with it and dumping a load more sleety crap on top of me.


My final stop of the day was another hour of sunshine and sleet showers spent in the area where I'd saved the blank on my previous visit, would it work twice? In short no. I watched the sun set and and fished until the floats, twitched right back to the boat, were barely visible. I packed up with the temperature dropping quickly but by the time I'd dragged the boat out once again I was sweating. Today had been a grueller but whispers on the wind were inspirational...
Posted by Michael Hastings at 15:04 No comments:

More bloody snow and more horrible cold frosty weather. When will it ever end? I've had more than enough of it now. Saturday evening was spent in an all you can eat Chinese buffet restaurant. After several helpings and some booze I emerged barrel shaped. After a late night and a day of cold crappy weather ahead, a visit to a local river and a spot of bank fishing was in order. No sensible person would drive sixty miles to fish from a boat on shallow waters with very little chance of a fish. Guess what I did...
By late morning I was afloat and fishing four deadbaits, lives would have been better but... There are only six weeks of the season left and I have to make the most of every opportunity to fish it, besides, I love it here and don't really want to fish anywhere else. I followed a plan of sorts; my first stop was in an area where I'd caught a few fish but not recently. For some reason I felt I had to give it a go here for an hour, just in case. An hour became ninety minutes before I moved to my second spot. This was where I'd had a couple of takes in the early afternoon last time out, a fortnight ago. The sky was clear, the day was bright and the views were beautiful. But the wind was from the north west and by Christ it was cold. I kept the baits moving, either recasting or twitching them back towards me.  The thinking was; the Pike won't be moving much in this cold weather so I have to put a bait close to them.  Two hours passed here before I pulled up the mudweights once again. My final stop of the day was in an area I'd been meaning to give a try for some time but hadn't fished so far this season. I cast the four baits and settled down in the bottom of the boat, out of the wind to empty the flask and watch the sunset. Maybe I should have stayed local and fished the river? No way! I picked up the rod baited with mackerel and twitched it back towards me. Was that a tug on the line? I opened the bail arm and let out a coil of line....yes! The float was sliding off. The strike met with a fish but not the hoped for monster, a jack thrashed on the surface before being unhooked alongside the boat. A fish against the odds, that'll do for me today. I'm still managing to find a fish but not the ones I'm after. 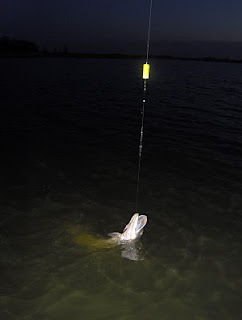 I had planned to fish into darkness but it was bloody freezing so after another big sky sunset I fished a while longer, till I couldn't see the floats then pulled the mudweights and headed back. Ice was forming in the slipway as I retrieved the boat. The journey home was brighten by the sight of a large Deer, I'm not sure what species (maybe a Red?) but this thing was a big stag with huge antlers. He crossed the road in front of me with an air that said “I'm crossing and you're waiting” before disappearing into the trees.  It may have been cold but there are some things you won't see sitting in a warm house, unless its on the TV.  A small fix of countryside sets me up for another week of the routine, here's to the next time.
Posted by Michael Hastings at 16:13 No comments: