Fifteen years ago today, I caught my biggest Pike. So because I haven’t posted anything for a while I’m using that as an excuse for some self-indulgent reminiscing. Most of what follows below (and a hell of a lot more) was written at the time.

There was this pit a couple of miles down the road, no fishing allowed as the place was leased by wind surfers but we always wondered what was in there. In the late eighties a local tackle shop started selling tickets so we were on it straight away. A few trips between us produced only a couple of jacks so we left it alone but vowed to keep an eye on it. A couple of years later I had a twelve pounder, possibly the first double ever caught here? Unlikely on reflection but it’s a nice thought. By the early nineties we were enjoying brilliant sport with big bags of doubles but the only twenty came to a friend Ian and it turned out this fish had been moved from the river by a match angler who didn't want it eating his roach…at least he didn't kill it. By this time access to the pit was more complicated so we had the fishing to ourselves, the information kept to a small circle of friends. At the end of the ’93 season a local club took over the water so our little nirvana was gone and we moved on to the next pit… We kept our ears to the ground and the news was not always good, the pit was being reworked for a start. The latest lease holder was transferring Pike to another pit and small Carp were being stocked. Obviously we hated this state of affairs but nature is a funny thing, those small Carp disappeared and the Pike that remained in the pit thrived. A young lad pulled out a very big Pike and the pit got a bit of pressure but the big Pike was elusive thereafter. We now knew the pit had the potential to do something a bit special but just how special was a shock to all of us.

On Friday 17th October, I arrived at the pit at 6.45am as the dawn light was beginning to grow. Within half an hour I was comfortably fishing from the eastern side of the peninsula with three rods. As usual I fished two deadbaits, a yellow sprat was popped up and given the big chuck towards the old hotspot and a smelt was float legered in the deeper water just beyond the drop off. . It was a mild morning, dull and cloudy with the sun piercing through only occasionally. The wind was a straight southerly which rippled the surface of the clear weedy water, but this was the only direction that would not allow me to drift. As drifting was not an option on a third rod I set up a float rig, set to four feet, roughly mid water and baited with a live carp. This was swung out just beyond the drop off, the greased line would slowly drag the bait across the swim from right to left. If nothing else then perhaps it would attract a little snapper which I could use for bait. I sat back in my chair, staring into the water my eyes slowly scanning from right to left checking the floats, full of confidence to await the inevitable takes.

Ten past nine, two uneventful hours past, both my deadbaits had been recast and the livebait had been working well. I sat deep in thought, contemplating a move to my left where a small point jutted out into the pit. Perhaps this vantage point would allow me to get a drifter going. My attention was abruptly diverted to my livebait rod, the float had gone and the line was steadily tightening. Without knowing it I was out of my seat and as I approached the rod the bait runner began to click. I wound down tight and bent into a heavy weight, the rod bent right round and stayed there, and the line immediately began a violin whine in the wind. Whatever was attached to the end of my line felt very heavy indeed and I assumed that I was playing a decent fish along with a weedbed. The fish stayed deep but was doing very little and allowed me to slowly pump it back towards the bank. As she approached the shelf she woke up and left the bottom for the first time. I caught my first glimpse of her as she kited along the surface from right to left at a range of about twenty yards and I realised there was very little weed on the line. At the end of the run a huge head broke clear of the water and shook defiantly before submerging with hardly a splash. The fight seemed to last forever but in reality was probably only a couple of minutes. After a couple of defiant runs which were thankfully short but extremely powerful, ending in angry boils on the surface I gained some sort of control. As the fish got ever closer the net suddenly looked inadequate. With a lot of the tail end still beyond the cord I lifted up the net and my luck held she was mine! I knew this was the biggest Pike I’d ever seen, surely it had to be a thirty pounder! 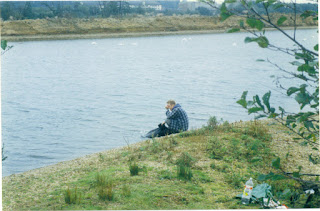 The unhooking mat was laid out ready and I staggered up the bank with my prize. The hooks were just behind the scissors, (God the mouth was huge!), and I removed them easily despite my seriously shaking hands. I hoisted her onto the Avon’s hoping she would take them into the red and counted the needle round. Ten, Twenty, Thirty! They kept going (oh my God!) Thirty five, Thirty eight, allowing for the net 36 ½ pounds!!!!!!. It couldn't be! I gently lowered her to the ground and repeated the exercise getting the same result, but I was shaking so badly I couldn't be sure. My mind reeled and all my strength had deserted my body. My hands were shaking as if I’d been drinking for a week and my legs were Jelly. The last time I felt like this I’d just been hit in the head by a cricket ball. I simply couldn't believe it and if I couldn't how could I expect anyone else to? I needed to find a witness but on a Friday in October who? I got my head together sufficiently enough to place this magnificent fish into a sack (was she really Thirty Six?) and as I lowered her into the water I was startled by the sound of the back-biter. If ever there was a time that I didn't want a take! The long-range rod was away still with no strength in my body I half-heartedly wound down and struck. The fish was attached and I had a real struggle to wind her in, I thought it might be a decent fish but luckily for me the fish was small and soon in the net. I really doubt if I could have coped with another big fish at this stage. Still shaking I unhooked and returned a fish of about four pounds, then slumped back in my chair. I needed to get my breath back and to think. 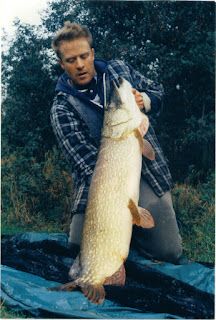 After a few minutes I had calmed down enough to allow some kind of rational thought and decided that with two rods already wound in, the simplest option was to wind in the third and leg-it to the phone box. I half jogged/half walked to the phone box which stood by the road half a mile or so away. I guessed my dad, Derek, would be at home so phoned him first and he was more than happy to come out. On impulse I dialled Rich’s number, not expecting an answer but my luck was in, he hadn't yet left for work and promised to be there as soon as possible. I jogged back to my swim, all the time praying that the fish hadn't escaped from the sack. What a nightmare that would have been! I breathed a huge sigh of relief when I returned to find all was well and cheekily recast a rod before collapsing back into my chair, exhausted once again.

Soon the cavalry arrived, Dad first and then Richard with a firm handshake and a celebration cigar. We made everything ready, scales tape and cameras. I crouched by the water and prepared to drain the sack I said a silent prayer of thanks. As I removed the fish from the sack Richard let out a gasp, she was huge! We measured her at forty seven inches long to the fork & she looked as deep at the anal fin as she was near the head. With help I re-weighed her and with Richard reading the dial we settled for a weight of 36lbs 2ozs. What a Pike! Long and dark with olive speckled flanks and a huge head. On one flank, near the tail was a red scar but otherwise she was flawless, a throwback to those beautiful Pike we’d caught in the early days. With a battery of cameras we quickly got the formalities over and with a strong sense of responsibility I returned the monster to the water. To watch her swim away was both a joy and a relief. Then it dawned on me, if the Domesday Book was ever re-written the Pike and I would be in it! I asked Rich if I was dreaming and he replied “no mate, you've just put a Thirty six back!” 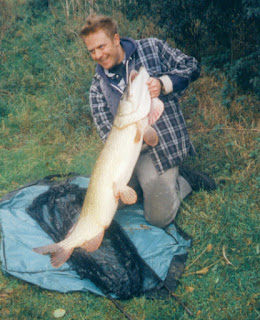 Being Pike obsessed from an early age my only ambition had been to one day catch a Pike that would qualify for Fred Buller's book and actually catching one blew my mind for a while.  It probably took a decade for me to get my fishing head back.  My state of the art tackle of the time was a 12 ft 2 1/2 tc century rod, 14lbs AN40 mono, QED wire (but I can't remember what strength) and a couple of size 8 partridge trebles.  As far as I know that fish was never seen again on the bank at least, it all seems a very long time ago now. There were other pits in the vicinity and for a while we had good sport exploring them but they are now part of a large commercial fishery catering mostly for Carp anglers. Our group of friends ran out of new pits locally about a decade ago and without that buzz of the unknown in the fishing we now seek it further afield. 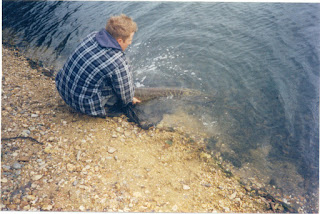 Posted by Michael Hastings at 14:09 2 comments: