Night fishing in winter is... 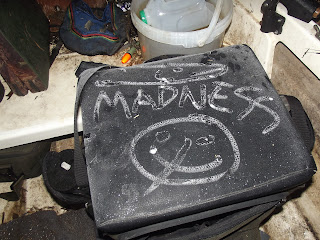 Written in the ice on the coldest night of this winter so far.


I’m sure every angler has his share of disasters but I’m beginning to think there can be few who has as many as me. Of course boats add to the potential for mishaps. A few years ago I managed to drop my engine over the side. I got it back but it left a mate & I with a long row home. A couple of years later while fishing with the same friend we somehow managed to sink the boat, we haven’t fished together since…. That really was a low point but there are no hard feelings, on my part at least. Last season I heard a splash whilst motoring along on the outboard and thought nothing of it but when I went to edge in on the electric motor…it was gone. A mooring post vanished on the same day.

This season has seen a series of classics. The first was an outboard that refused to run later diagnosed as water in the fuel but God knows how that happened. This resulted in me having to literally drag myself off a broad, along the edge with handfuls of reeds as the wind was too strong for me to row against. After this I had a three mile row back to base. Since then I’ve lost a mud-weight which got snagged in something causing the ring to break as well as one of the bars that hold the (home-made) folding cuddy under tension, which jumped over the side. Later that trip I was blown off the weights and with a precarious drifting boat I quickly started the engine to get out of trouble only to get loads of braid wrapped around the prop!! The law of sod is familiar to the boat angler.

Recently another series of disasters befell me, for starters a collapsing trailer and boat stuck on the slip, nightmare! After an hour of sweat, grunt and “you don’t want to do it like that…” from the growing audience, the situation was sorted. The boat was shifted, the trailer wasn’t terminal but I did have a busted oar. Ah well. I loaded the car and left later than expected only to find the CD player wasn’t working. Radio 5 was tolerable only until they threatened to play Mcfly when I tried the CD player once again and this time it worked!! I was so enjoying the sound of “Magic world” by Eels that I missed my turning…. 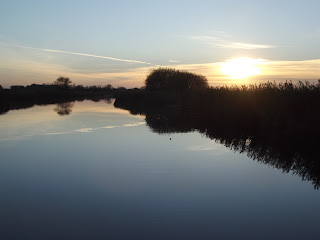 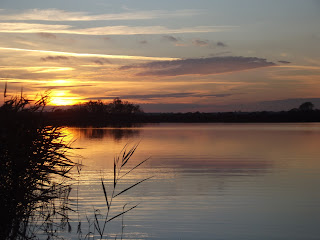 And of course we do catch a few fish along the way. Here's one from 2011, on one of those occasions when the luck really was on my side but that's another story! 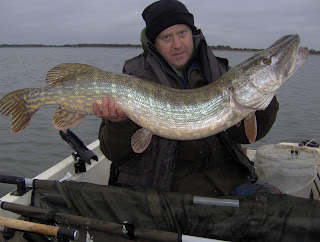 Posted by Michael Hastings at 12:45 No comments:

11/11/12
Armistice Day when we remember the brave people who fought for this country, including members of my own family.  Ironically at a little after 1100 Madi, Isaac and I were settling into the cinema to watch “Skyfall”, the latest James Bond film and bloody good it is too.

Dragging Isaac out of bed early for fishing is never easy so instead we decided to do things in reverse today.  After the cinema we loaded the car and nipped off to a local stillwater to try and catch a Pike as the light faded.  We arrived at 1530 and found to our surprise that we had the water to ourselves.  Texts from a friend informed me that other local waters were packed so we were fortunate indeed.  I chose to fish on the western bank, not just because it was close to the car which was a happy coincidence.  If I have little else to go on I’ve always liked having the sun behind me.  I have a theory that Pike can use light entering the water as a screen whilst hiding in the shade behind it, this stems from watching Pike in the “Aquarium of the lakes” many years ago.  The largest Pike in the tank was hidden in a sunken tree directly behind a beam of light entering from the outside.  A step to the left and the Pike was clearly visible, a step to the right and the fish was hidden behind a shaft of light.  Food for thought at the time and since.

This area is also a slight point with three swims close together so as we had the place to ourselves I decided to spread our four rods (two each) between these three swims and cover as much water as possible.  OK we were bending the rules a little but who were we hurting?  Isaac hadn’t fished since early September so after a brief reminder he was soon casting again.  I’m happy to say his timing has improved greatly and for the first time his deadbaits went further forwards than skywards.  We fished with Herring and Sprats either on the lake bed or slightly popped up, these were occasionally twitched back towards us to cover water.
It’s amazing that at ten years old, today's visit to the cinema was actually the first Bond film Isaac has seen so we spent the afternoon dissecting the plot and discussing the various explosions and deaths.  As the light faded the area came alive with silver fish topping and things looked good for a take.  There were no more substantial swirls amongst the silvers, sadly no Pike putting in an appearance.  We fished until we could no longer see our floats before giving it best and returning home for Sunday dinner.  Another failed attempt to christen Isaac’s Pike rod but he’s enjoying the thrill of the chase and we’ll be back soon!! 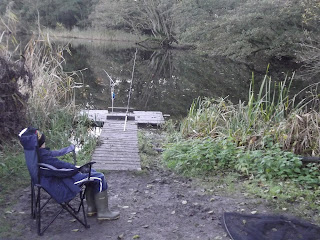 I’m sure I’ve ranted on about Otters on here before but recent events mean I'm going to do so again.  I saw my first wild Otters in Ireland about fifteen years ago and I can remember how excited and privileged I felt at the time.  Back then the Otter was a rare British mammal and to see them at total ease and comfort in their own natural environment was fantastic.  They never allowed us to get to close but the Zoom on the camera gave us a good view.  Until relatively recently I’d never seen one in England.  I saw my first about five years ago on the Norfolk Broads and since that day sightings all over East Anglia have steadily increased to the point that I’m seeing Otters more often than not.  So why, you may ask, do I find this state of affairs bloody infuriating?  Because there are too many of the bloody things!

The situation we witnessed in Ireland was idyllic as far as Otters are concerned and as I said it was a real joy to watch them behaving naturally, at one with the eco system.  If this was how things were in Britain right now then nobody would have a problem.  However the situation we have here has gotten out of hand thanks, inevitably, to the intervention of man.  Otters are being bred in captivity then released into the wild in artificially high numbers so that the environment cannot sustain them.  Otters should be wild and elusive like those in Ireland, they should not be swimming under my boat then popping their head out for a staring match.  Otters should be catching fish for food in such a way that the ecology is largely unaffected by their presence.  They should not be cleaning out Carp pools and leaving them void of fish (as has been widely reported) nor should they be attacking adult Mallards as I witnessed in Norfolk recently.

Otters are a protected species so a fishery owner finds himself in a situation where he is unable to shoot one to protect his stock, which in the case of Carp may be worth up to £5000 per fish.  Contrast this with a farmer who does have the right to shoot a dog he feels is “worrying” his livestock which may not be worth anything like as much.  As a passionate angler and wildlife lover the situation is equally frustrating, I have no problem with Otters being around but not at the expense of the fish I’m trying to catch or indeed the other birds and wildlife that live in harmony within the environment.  Nature is a wonderful thing and given time the balance will redress itself but how long is this going to take and at what cost?  It’s not just commercial fisheries and Carp pools, in some cases wild, natural fisheries could be wrecked for a generation.  It would be irresponsible to condone anglers taking the law into their own hands but sooner or later, it’s going to happen.
Posted by Michael Hastings at 13:43 No comments: