Last week scientists from the John Innes Centre who have been studying the Prymnesium parva algae put forward a theory that resonated with anglers.  The scientists suggest a virus may be present in the silt and when disturbed it may be this that causes the Prymnesium to release its toxin.  Obviously this would suggest that dredging is dangerous, as anglers have been saying for a long time.

Sadly this has no effect on the great minds at the Broads Authority, they still risk the chain of life just so unsuitable craft can be sailed.  This was the scene in Norfolk last week.  Yes the BA continues to dredge using antiquated equipment while they plead ignorance of the latest scientific findings.  If conclusive prove appeared to be imminent the BA would probably just speed up the work. 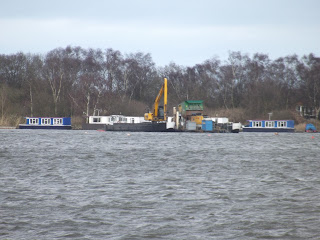 Since the new year I've continued fishing here and there on East Anglian stillwaters.  Another drive to 'Strangeways' resulted in a blank when everything looked spot on.  I also had a great day as a guest of Mr N when we caught plenty of fish though nothing of any size.  I always love Pike fishing, wherever I fish but I was beginning to feel the itch of withdrawal and an urge to get the boat out.

At the beginning of the week my mind was made up, I was going to the special place. As the days passed the forecast got worse and worse and I began to look for other options.  I had some precious time and was desperate to fish but where should I go?  I couldn’t get enthusiasm to travel to Strangeways and ‘Nail a tenner’ had been up and coloured when I’d gone for a look the week before.  I’ve found that normally clear pits fish badly when they colour up quickly, would it have settled down enough by now?

There was a water close by that I had planned to fish this year but the word on this one had well and truly got out so I had opted to avoid the crowds.  However it is a place I knew well having fished it a lot in the past and I remembered a little fished area where the Pike used to move into at this time of year.  This may be a pre spawn gathering or it might just be fish moving away from the easy access, pressured swims.  How much would things have changed in the last quarter of a century?  The area would involve a long walk, and there was the risk I’d find a weekend Carp angler already bivvied up.  If that was the case there was a second swim I fancied but this was would involve even more effort to reach. I found myself finding reasons not to bother.

On Friday evening I had hoped to find a better forecast but the strong winds remained. I had very little enthusiasm but went through the motions of getting my gear ready to fish from the bank, somewhere.  The forecast threatened morning rain as well as the strong winds so I’d have to carry more gear than I’d like.  Could I really be arsed to fish the old place?  I decided I should get my gear sorted and ready to load and just see how I felt when the alarm went off.  Going to bed knackered I felt the chances that motivation would strike at 0600 were 50/50 at best.

The alarm woke me and I lay listening to the sounds coming from outside.  I could hear the rush of wind but I couldn’t hear rain on the window.  I swung myself out of bed and staggered clumsily around the house for half an hour before I managed to load the car and get away.  A short while later I rolled through the gate, happy to see an empty car park.  I loaded up and set off on a long walk through shit sticky mud.  I remember these muddy paths regularly clogging the wheels of my bike when I was a mad keen young piker.  By the time I reached the point where the path divided I was sweating and breathing heavily and it was this that settled the swim choice, I decided to fish the nearer, easier of the two swims.

The morning had a little drizzle on the wind and was very cloudy, all very dim.  I set up patiently as I needed a little light to see my targets.  My swim was a point jutting out into the lake, I always like bottleneck swims and this one has a gap leading to another bay and a nice tree lined island in front of me.  I legered a Lamprey in the gap and float legered half a Bluey alongside the island.  Both were tricky casts but they seemed to OK, as far as I could see through the gloom.  As usual my third rod was a paternoster rig baited with smelt.  I whacked this out into open water with the intention of twitching back but it occurred to me I hadn’t actually caught anything on this method for quite a while.  I also went through the routine of casting a spinnerbait around, counting down and checking depths.  My memory didn’t need too much of a jog as I’d spent a lot of time in this swim, albeit a quarter of a century ago, things hadn’t changed much at all beneath the water at least.  The banks are now unrecognisable as the place I used to fish.  Reminiscing I realised this swim had produced no less than three PB Pike for me when I was a teenage Piker.  It was also here, around that time that my Dad took a January swim to retrieve the brolley I’d received that Christmas which had uprooted and blown onto the island! 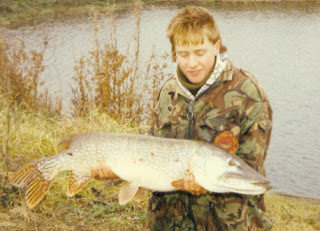 After a while I settled down under the oval brolly.  I rarely use this thing but every time I do I’m impressed by how stable it is on these windy days.  After about an hour I got out of the shelter and twitched the paternoster rig back a bit then started pinging the spinnerbait about again.  After a couple of casts a micron started tinkling, I looked round to see the float on the paternoster rig was travelling slowly but surely towards me.  I wound into a decent weight which I pumped slowly back towards me.  The fish felt fairly heavy but did nothing much other than splash a bit in the shallows and pull the rod down a bit, then it was in the net.  I left it there while I got all the paraphernalia ready then hoisted her out and onto the mat.  Hooks out easy, a couple of quick self takes then onto the scales, (a little heavier than I expected and within a couple of ounces of one of those eighties PB’s,) then back into the pit. 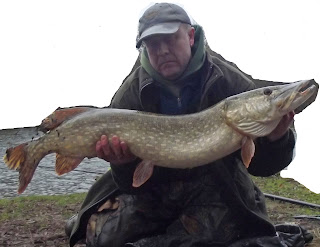 I quickly recast a fresh Smelt on the paternoster and also decided to do the same with the other two rods as it was now fully light.  Both splashed down bang on target, happy days.  I sat back with a smile and a brew, delighted to catch a decent Pike on my first visit to this water for a very long time.  By this time the 2nd ODI match had started so I had a nice morning chilling out and listening to the coverage on TMS.  It seemed a decent match with England just taking enough wickets to keep South Africa in check.  The Lamprey cast into the gap had landed nicely so I just left it there as I the strengthening wind would make a recast difficult.  Fishing from a peninsula gave me lots of water to cover and this I did with the other two rods and, from time to time with the lure rod. 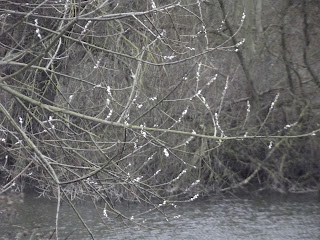 The morning passed happily but it was still gloomy with a howling wind, it was going to be one of those sunless days. This mild winter has been bizarre but still I was surprised to see white blossom buds on the branches of a tree.  I was content and comfortable but I wasn’t catching so began to consider a move back towards the car.  These thoughts were shattered by the wail of the ‘Billy’, the Lamprey in the gap was moving.  I wound down quickly and had a repeat of the first fish, I pumped it straight back and into the net.  Grabbing the arms I peered down onto another good sized Pike, I began to suspect it was the same one I’d caught earlier.  The scales told me it was a couple of ounces lighter.  I decided to photograph it on the mat but like a muppet I clicked the wrong flank and now I’ll never know for sure if it was a repeat capture. 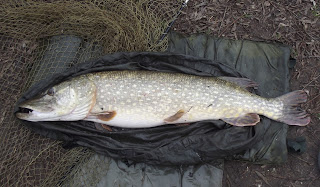 It seemed sensible to stay put but getting a bait back into the gap took about five attempts before I was happy.  An hour later this same rod was away again, hoping for a hat trick I wound down and felt a Pikey head shake before all went slack.  I hate losing any fish but at least this one had felt small.  By now it was early afternoon and England were batting steadily, not piling the runs on but keeping wickets intact with Hales looking set for a big score.  I stuck to the plan of keeping a bait in the gap while I searched the water with the other two rods.  A friend came for a visit and drew my attention to a nice treeline alongside the peninsula I sat on.  I’d left the paternoster here for twenty minutes or so earlier but decided to chuck half a Bluey just ‘round the corner’.  This bait was in place for about forty five minutes before it was picked up but this time I wound down and struck thin air!  Oh well, get it back out there there’s still a chance.

Back under the oval, in South Africa the cricket was heading for a tense, tight finish but then Buttler hit three sixes and Ali two fours to finish the match with England looking more comfortable than any of us fans actually felt.  I started casting the spinnerbait around again, instead of covering the bottom I buzzed it back quickly in mid water hoping to attract the attention of any Pike.  Maybe it worked because the float leger moved off again and this time I managed to set the hooks into a jack with attitude which helpfully unhooked itself in the net.

When I left home in the morning I hadn’t planned to stay out much after lunch time but the cricket had taken me well into the afternoon so I decided to fish on till dusk.  I cannot remember the last time I fished a whole day for Pike sat in one place.  There was no sunset as I hadn’t seen the thing all day.  Bird life had been sparse today too just a few swans and geese along with a couple of ducks.  A brief visit from a Blackbird had been the only bankside birdy visitor.  Maybe I should have stayed into darkness but I started to tidy up ahead of darkness and ended up carrying on and going home before I needed a head torch.  It had been nice to catch fish from an old haunt and this water seems to have a reasonable head of Pike again these days.  I may come back again some time, maybe not for a while. I'm still itching to get the boat out on the Broads again.
Posted by Michael Hastings at 14:45 No comments: