The Roach fishing seemed to have peaked early this spring, some speculated the fish had spawned and moved away early this year, certainly my two most recent trips seemed to endorse this.  The first saw just a couple of twitchy missed bites at dusk and the second a total blank.  The following day I still had the car loaded but as the work day wound down I still hadn’t decided whether to bother or just go home.  The weather was hardly encouraging, dry and bright but the North easterly wind was keeping things cool.  Should I turn right at the gate and head for home or should I turn left and fish?

Half an hour later I had two rods out in a sheltered swim, surrounded by tall trees.  As fishing for Roach was obviously hopeless I decided to change things, instead of identical rigs fishing the same area I decided to drop one in close and bait it with corn.  Before the splash of the feeder subsided I chucked two handfuls of corn on top and another two of maggots, then I left it to its own devices.  Ever the optimist I had Tench in mind on that one.  As usual the other was dropped down the shelf, baited with maggots and recast every ten minutes or so.

Once settled down with a brew I felt content.  In all likelihood a blank was on the cards but I was in a lovely spot watching Grebes, Mallards, Tufties and a Swan.  There was plenty of birdsong coming from the newly greening trees, Blackbirds, Green Woodpeckers and a Pheasant squawked away to the North.  When all is said and done this is a pretty good place to unwind on a spring evening, even if the wind did mean the heavy coat was required.   However if tonight is another total blank should I reconsider my future plans?
1930, an hour has gone.  The pheasant is still noisy, Pigeons and Crows have joined the chorus but there are still no fishy signs in the swim.  A week ago this wouldn’t have bothered me, it’s still early in the session but now the doubts creep in.  This is a moody water, stuffed with fish of all species but they are highly nomadic and this is one of those times when you wonder if you are within a mile of one. 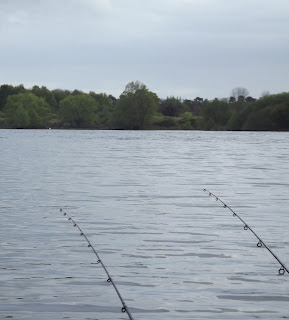 2000, the wind has dropped briefly and the swim is calm, revealing nothing.  A week ago I started getting unhittable rattles about now but not yesterday and I’ll be surprised if it happens tonight.  2010, A faint but definite rattle on the tip!  I’m all attention now…  A couple of minutes later I wind in maggots that look untouched…  Was it a liner?  My optimistic side wonders if a nice Tench has brushed the line on its way to my baited spot in the margin.  Another prolonged gust of wind makes me glad the Catch Cult hat is pulled down tight over my lugs…  Was that another rattle?!  If so I’m too late again, sure enough the maggots have been chewed!  Its growing dark now and I untangle the head torch, there’s a splash under the tree near my margin rod, was it fowl or fish?  Shortly after the recast the tip thumps round and it’s unmissable!  But I missed it… this has happened a few times this spring.

By 2025 the bats are out, my hands are cold and I’m hungry. I’ve run out of groundbait and it’s not really worth making more so I start tidying up.  It would be nice to end on a tale of a big fish against the odds but I finished with the blank I expected.  If I’d been a bit more positive I’d have probably fished better but at least tonight brings a bit of hope.  There are still fish around, I should have known better as it was hit and miss last year.  I just have to stick to my guns and keep going whenever I can, there’s still a chance this spring.
Posted by Michael Hastings at 14:54 2 comments:

By the time the Pike fishing season finishes I’ve usually pushed my luck with the family as far as it will go and actually feel like a rest from early mornings and physical fishing.  However I still need to get my fishing fix so what I really need right now is some interesting (that word again) short session fishing.  Luckily a year ago I stumbled, almost by accident, onto some good Roach fishing so right now this fits the bill nicely.  Once upon a time I would have laughed at the thought of finding myself fishing for Roach but apart from being interesting (!) it ticks the other boxes too.  The water in question is quiet and beautiful, the fish grow big.

As I get older I realise the benefits of keeping an angling diary too, I was able to go back a year and remind myself exactly how I went about it from location to groundbait mix to hook size.  This time I felt confident enough to tweak things a little.  Open end feeders, helicopter rigs and short hooklengths, my set ups would still make a proper Roach angler weep but I’ve gone a little lighter all round without breaking my philosophy of not wanting to get a bite if I can’t actually land the fish.

Since the Pike rods went to the back of the shed I’ve fished three times, all short evening sessions covering the last couple of hours of daylight and the first hour of dark.  Already a pattern has formed, during the early period it seems as if there isn’t a fish within a mile of my baits but this gives me an opportunity to soak up the sights and sounds of the birdlife which is constant.  When this subsides at dusk the silence is stark and the flight replaced by bats.  I recast regularly to keep the feed going in and half an hour before the bats come out the Roach switch on.  This also coincides with the dropping temperature requiring warm head gear in the form of my new ‘Catch Cult’ hat.  Of course it could just mean that the new hat is a lucky one.  So far I’ve caught a few Roach and missed a few too, only one required the scales and if I’d have been a bit more organised I should have used the camera too.  To be honest I’d have settled for this but I’ll be back soon, hoping for more and bigger! 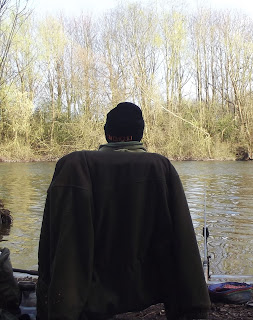 Talking of 'Catch Cult' the new magazine has been very well received and actually sold out!  Well done Rob and Martin, roll on issue 2!
Posted by Michael Hastings at 13:58 No comments: