It had been a week of gales.  The last Beech leaves, brown and brittle had been stripped from the hedge; it’s as bare as it gets now, another month and the first green buds will be opening.  As ever I’ve kept an eye on the weather but all it foretold was more strong winds.  I was planning to fish with Rich, one last trip to get rid of all the deadbaits but in the end he saw the forecast and done the sensible thing in calling off.  We’ve both had a decent Pike season and now we’re ‘Piked out’, in need of a change.  I looked at the forecast again, being thrown around in a boat while the wind tries to uproot trees didn’t sound like fun.  ‘Ah Fuck it’, I decided to load up some bank fishing kit and find somewhere close to home to chill out for a bit.  In truth I had little enthusiasm but knew that if I didn’t get the kit ready I’d wish I had in the morning.

As usual I was awake before the alarm and left home in the half-light around 0600.  The roads were very wet, it had obviously pissed it down in the night (such deduction!) but it wasn’t falling now.  The verges are showing the signs of spring now; white blossom in the hedgerows, green buds on bushes and flashes of yellow gorse on the embankments, I welcome it all gladly.  Except the early morning starts, by the end of the Pike season I’ve had more than enough of those.

I was fishing by 0645 with three deadbaits whacked across a strong South west wind.  A smelt to the left, float legered at the bottom of the shelf, in about eight feet of water.  In the middle I legered a mackerel, flung about fifty yards landing just short of a visible snag.  To my right I float legered a herring half way up a gentle slope.  With that all done and the mat/landing net organised I set about getting the Oval up and pegged down solid.  I’ve got the hang of this after about four years of use but in my defence it only comes out a couple of times each season.  I sat back in my comfortable chair with everything organised under my oval oasis.  With this level of comfort bank fishing actually makes a nice change!  The trouble is, with this amount of kit, once I’m set up I get lazy. 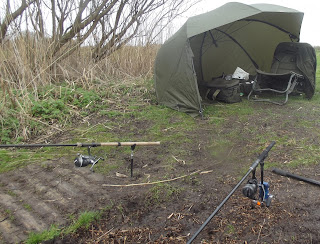 The morning is gloomy but very mild and I have to shed the jacket despite the fresh wind.  Around me nettles are poking through the muck, I already have my first sting of the year from pushing in the pegs.  New green reeds are also showing, pushing through beds of pale cream Norfolk reeds.  Half an hour flashes by then all of a sudden the Micron pipes up; the left hand float is moving upwind.  A Pike of about seven pounds has a good go but is soon in the net and soon laying on the mat.  I re-hook the smelt as it’s the last I have and send it back out. 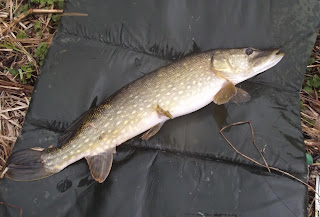 Another half an hour passes and this time I see the float move before the buzzer sounds (Do people still call them buzzers?  My circle of friends did so for a long time after they no longer buzzed).  It’s the smelt again and a similar sized fish but this one has a nasty scar; spawning damage or an escape from one of the furry bastards?  The smelt goes out again, will I get a hat trick? 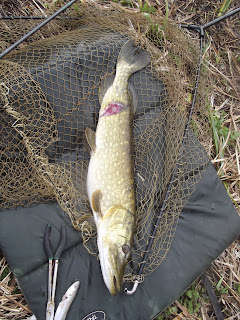 0800, there’s a bit of brightness piercing the clouds now and as I’m rummaging in the bag for shades the Bluenose shrieks to tell me something has picked up the mackerel.  The first two fish had been on a ten foot boat rod so this twelve footer felt ungainly as it hooped over, unfortunately it didn’t stay hooped and I pumped a small fish back with no trouble.  An hour later, the brightness was just a dream but the wind is still manageable.  The odd gust is a bit lively but I’m still plenty comfortable.  The rod tips are bouncing nicely and on a couple of occasions I had to do a double take and found myself half out of the chair.  I’ve now gone an hour without a take, if I was in a boat I’d definitely be looking to move by now.  But in front of me is quite a large piece of water, there are still options, areas to search as the day passes by.

Almost 1000, the wind still isn’t as bad as I expected.  That’s a Micron!  The smelt is moving again.  I pulled into a fish that felt heavier, it was on for a minute and I still hadn’t seen it when it came off.  Bugger!  That’s the end of the smelt so on goes a Herring and I sat back swearing and chuntering.  1020 and the BBB sounds again, this time the bait is half a bluey.  The twelve footer flops over again but the resistance is minimal and a fish is soon in the net, I recognise that scar, it’s the same fish I caught earlier in the day.  It’s proper windy now, the waves are crashing past me and I’m actually glad I’m not in a boat today.  Another twenty minutes and the line is out of the clip again, is it the wind.  I wound down to nothing and retrieve a chewed bluey which was soon punched out to the same place.  It’s rough now but the Pike seem to like it. 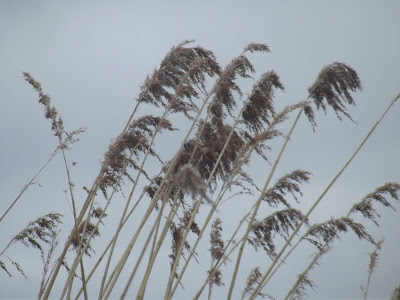 As someone who usually moves a lot, it’s interesting to sit in one place every now again.  I had three takes in an hour first thing then almost two hours without anything before another three takes in an hour.  In normal circumstances I would have moved…  1110 there’s a lull in the wind, it’s almost tranquil at the moment but I can hear it coming, the sound of rage charging towards me from the south west.  Soon it’s roaring again, branches are creaking and the reed tops are bouncing.  I swear a Cormorant trying to fly upwind was blown backwards and gave up.  I really should jack it in and get my arse out of here but the Pike!  Do I really feel the need to catch more before I call time on the season?  Why is that?  The only important question is ‘am I still enjoying it?’ and the answer is still yes! 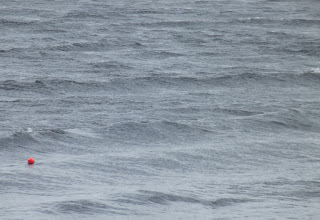 At 1145, after a quiet hour the rod cast to the snag is away and the alarm is screeching again, line is peeling off but I connect with sweet FA.  It may have been the wind but I have a feeling it was a take.  Will this signal the start of another little feeding spell?

By midday it’s a little brighter and the sunglasses come out again.  The alarms have shouted at me a few times, I check them but nothing doing, just the wind.  That is until 1225 when for the first time today, the right hand rod baited with herring is in business.  This fish is angry and feels like a good ‘un, I’m surprised when it shrinks at the net.  A couple of weeks ago it would have been a double but today it probably isn’t.  Half an hour later the same rod goes again, I quickly bring the smallest Pike in the lake to the surface where it shakes its head and chucks the hooks back at me.  Oh well…  The wind is still raging but the Pike are still moving.  Another half hour and another dropped take.  The float was sliding away until I picked up the rod when it popped back up. 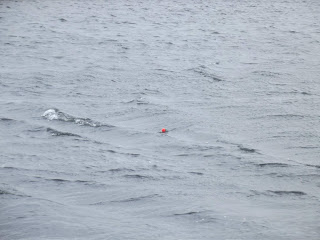 The roar of the wind is constant but I hardly hear it, it’s become default.  Every time I consider packing up I get another take.  At 1400 it’s a bluey cast towards the snag and another fish that felt decent at first but shrank at the net, they are all welcome.  After that I had another quiet hour, I’m sure that had I stayed on I would have had another fish or two but by 1500 I’d had enough and started to pack up.  Is this a sign that I am ‘Piked out’ at now?  Possibly.  I know for sure that I’ve had enough of howling winds, breaking ice, relentless grey and darkness and the alarm going off at an obscene time.  For a few months at least.

Posted by Michael Hastings at 14:36 No comments: