After another session in early May spent sitting behind a rod pod, catching bugger all and seeing nothing of note, I fancied a change.  With so much water unfishable from the bank the only sensible option is to take to the punt and go looking.  So this is what I have been doing for the last few trips, spending at least an hour mooching around trying to find a sign but it hasn’t brought a change in fortunes.  Last year I managed to spot both Tench and Carp, even if I didn’t manage to catch them but so far this season I’ve seen bugger in the way of clues.  I’ve also gone through the ordeal of making the same mistakes; i.e. I really should remember that traditional groundbait attracts every silver fish for miles.  I like float fishing but it’s impossible to keep a bait in the water, even fake corn gets battered and the float is moving constantly.  If a proper fish took my bait I might not even know the difference.  I did feel the difference when a decent Pike grabbed a Rudd and swam past the boat and away taking my size 14 with it. 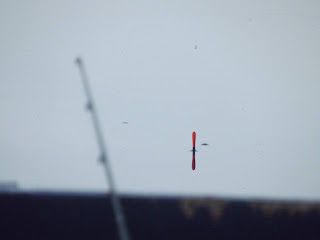 The way to approach the fishing would be to use the punt to drop baits into the holes in the weed, top up with a bit of bait then carefully row away, tie up quietly then sit it out.  That is fine in theory but in practice any kind of crosswind makes this much more difficult than it should be!  However with a bit of practice this method of presentation is manageable but it still hasn’t worked for me. 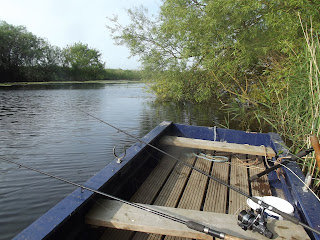 On a recent trip Isaac joined me; I didn’t intend to put a boilie rod out but brought it along just in case.  We spent a pleasant couple of hours messing about in a boat, which gave me a chance to look for any fish that weren’t scattered by the commotion of Isaac’s rowing.  We stopped for a while and fished with floats and corn.  We caught a few Rudd and had a few laughs then moved off again.  The water was crystal and we saw thousands of Rudd but still no sign of Tench or Carp.  No worries, being lost in the East Anglian countryside has other benefits, the Cuckoo has been vocal and visible for a few weeks now and all the usual wilderness residents have been putting in an appearance.  Isaac and I spotted a Bittern last time out. 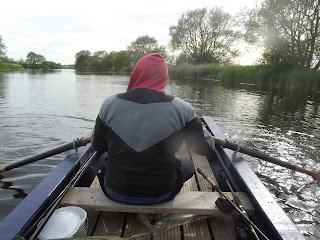 By the time I fish again I expect the fish will have spawned and the chance of a real BIG Tench will have passed for another year but you never know...

Posted by Michael Hastings at 14:08 No comments: