For once I was able to take advantage of a rare mid week day off and head back to my nirvana. My lady was also off work and having heard me talking on and on about the place was dragged mumbling out of bed at 5am to join me for her first experience of my favourite place on earth. We were both soon revived by tea and set off through the early morning gloom.

The forecast had been horrendous and we were greeted by sheets of drizzle and rain sodden roads. Shelley stayed warm and dry in the car while I launched the boat and I'm sure she was constantly questioning her sanity. But soon there was no hiding place and she found herself in the bows as I motored the boat down to our starting point. The sky was dull and grey with a bit of light rain whipping in on a moderate southerly wind but not as bad as I feared. As I passed over an area from which I'd caught several fish in the past I had a nagging feeling that I should be dropping the weights down here. However I kept going and moored the boat alongside the reeds for shelter to let Shelley get accustomed to being afloat. Four deadbaits were thrown downwind and we settled down to enjoy the scenery, the wildlife and an early fried breakfast.

We spent a couple of hours in this spot and the weather wasn't nearly as bad as the weatherman had threatened. With Shelley having found her sea legs I lifted the weights and took us into the open water spot I fancied. We spent ninety minutes here, Shelley was able to enjoy the full 360 degree panorama and really get a taste for the place. She was busy looking through a camera lens but no Pike disturbed us or put in an appearance for a photo call.

Our next stop was a more sheltered area, one from which I always seem to catch these days, (that's just put the kiss of death on that then...). Two deadbaits were cast into open water while two more where fished towards the reeds. We settled down and had a hot lunch, no sooner had we finished this than a large, ominous looking bank of dark cloud came up from the south west. Soon the threatened rain was starting to fall on us but the worst of the weather seemed to be passing by to the north of us. It was at this point that for the first time today I was disturbed by the wonderful sound of a boat biter singing. I looked up to see a float heading steadily towards the reeds, the Pollan had been picked up. I bent into a lively fish that although fairly small was very welcome. This was the first Pike Shelley had ever seen and she was impressed, “If that one's small. What are the big ones like?” 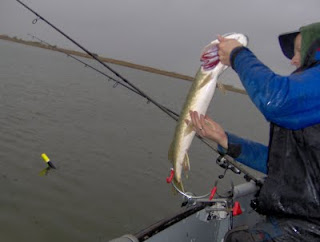 A fresh bait was cast out and I settled back with a smile. I'd slowly sunk into thinking a blank was on the cards but this fish had saved the day. At this point the wind strengthened and swung to the north west blowing the deep grey clouds in our direction and dumping loads of heavy rain on top of us. The plan had been to get off the water in the late afternoon but after half an hour of this we were both getting wet so decided it was a good time to call it a day. Ironically as we headed back to the boat yard the sky was clearing in the west and our arrival was heralded by a rainbow. That's now three trips and three fish but so far the big gals are avoiding me... 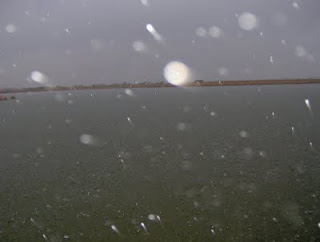 07/11/09
It's now the first week of November and I feel like I'm back in the groove. A cup of teas brings me round a little after 5 am then there's an hour journey north with the Prodigy pumping out of the stereo. The dashboard of the motor claims the outside temperature is 2 degrees (glad I'm wearing my winter hat this week) but I'm not sure I trust it? During the journey road bridges take me over five different rivers and I've caught Pike from all of them over the years. For once the journey is smooth with no annoying delays. By the time I reach the boat yard the temperature has allegedly climbed to 5 degrees, the sky is lightening to the east and I'm frantic as the tea I drank first thing is working its way through so I have to jump from the car to answer the call.
Half an hour later I was in position, the sky is clear and there's a light wind from the west. Four deadbaits are spread around the boat, not in a haphazard manner, a little thought has gone into their positions and I had a plan in place for the rest of the day. On each rod is a different bait, Mackerel and Bluey are fished downwind, a Lamprey cast upwind and a Pollan was cast away to the side and gradually twitched back to the boat. When I first fished this system a few years ago I did so expecting to struggle but happy in my surroundings, nowadays I expect to catch fish. Over the years I've learnt bit by bit and now I feel comfortable on the water.
Half an hour later I sat scanning the floats and as I glanced towards the one on the rod baited with Bluey as often happens I noticed a calm patch caused by leaking oil from the bait..... “hang on a minute – that float's on the move!” I quickly set the hooks and there was a bit of resistance but it didn't prove to be one of the big gals. Still a nice fish around the double figure mark was soon in the net, unhooked, briefly admired and returned to the murky waters. That'll do for starters! The bluey was still attached so I recast it and sat back to celebrate with a hot mug of tea.
I kept the pollan moving, twitching it back a foot or two every now and then, something that seems to work on this system but not on others, for me at least. After half an hour I decided to put a fresh Bluey on and whilst on my feet recast the Mackerel. I then picked up the rod baited with Pollan, intending to twitch it back again but as I did so it was solid. I opened the bail arm and sure enough line started peeling off. Closed the bail arm, wound down and....yes! Fish on! This one put a good bend in my antique Tricast rod and was obviously heavier than the first. She plodded a bit but was soon rolling over the net, a good long fish in absolutely mint condition and my first proper Pike of the season, get in! Here was a fish that justified using the Sladle, for the first time since March, and once again I couldn't help but be impressed by how easy it makes the whole unhooking procedure, a superb piece of kit. A quick photo and back to grow a little bigger. 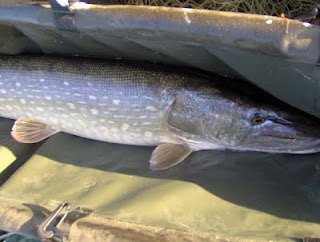 With two fish under my boat I stayed in the area longer than I normally would, with grebes in the area I felt confident of more action but by eleven O clock nothing else had happened. I twitched all four baits back to the boat and as I did so pondered my next move. Do I stick to the plan I had in mind or head off and search? I chose the former and moved about 100 metres upwind and spread the baits out once again. This procedure was carried out a couple more times during the early afternoon but the fishing was uneventful. I was tempted to describe this part of the day as quiet but it was hardly that with the sound of gunshots reverberating around, the pheasants were obviously taking a battering. There was also a lunatic circling the water in some kind of light aircraft that sounded like it was propelled by wasp power. Despite this it was thoroughly pleasant, sitting back watching the ever present Harriers circling to the south of me and enjoying the autumn sunshine. I could easily have dozed off. However there was a sense of killing time, I expected the afternoon to be quiet but was confident of picking up another fish or two as the light faded later in the day.
In mid afternoon I moved once more, this time settling into an area that had produced the goods late in the day before. Rich came by and stopped for a quick chat, exchanging notes before he headed off to pastures new. With fresh baits soaking I sat back and enjoyed the last of the sun as it sank below the reeds, ever expectant of a take but on this occasion it didn't materialise. When I realised I'd left my torch in the car I had to do the sensible thing and pack up quickly. Another day spent doing what I love had passed by quickly, roll on the next one. 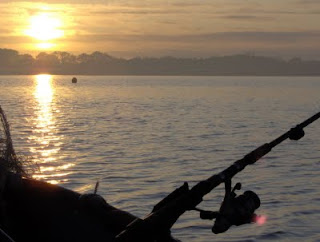 Finally, a few days ago the sad news came through that the father of modern Pike fishing, Dr Barrie Rickards had passed away. Although he had not enjoyed the best of health in recent years this still came as a bit of a shock. His book 'Fishing for Big Pike' co written with Ray Webb in the early 70's revolutionised the way anglers went about fishing for the species. As one of the founder members and original committee members of the Pike Anglers club of Great Britain he also spear headed the movement to return Pike alive conserve the species. Through his writing Barrie both educated and inspired me to fish for Pike and by trying to emulate his thinking approach I like to think I have become a better all round angler. In recent years I was privileged to meet the man on a couple of occasions and have an all too brief chat with a true gentleman. The most influential Pike angler we have seen has passed away, Barrie Rickards RIP.
Posted by Michael Hastings at 14:16 2 comments: