5 of the best from the last century

Although I’m not a Carp angler I enjoy reading some of the monthly Carp magazines and have to say at their best they’re a much better read than the Pike/Coarse media. Anyway I’ve nicked this title from an idea that I saw in the Carpy mags because I thought it would be fun to write. The stories of five of my best Pike captures from the 80’s & 90’s told in brief. How do I define “Best”? Well obviously pounds and ounces plays its part but this is not about my ‘five heaviest Pike’. I’ve excluded my PB because I wrote about it on the blog a while back.  These are my most memorable Pike, the ones that mean the most to me. 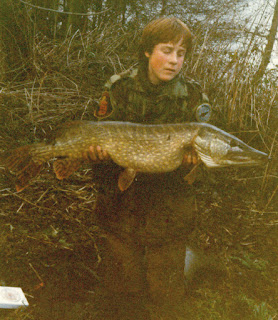 You never forget your first twenty, it was 23rd December 1983 and I was a few months short of my sixteenth birthday. I’d been concentrating on one particular gravel pit since seeing a big twenty caught there in the autumn. It was a dull, damp but mild winter day with a breeze springing up from time to time. At 1345 my indicator sounded, the tinny tinkle of an original optonic, my Herring which was cast into deeper water alongside a gravel bar had been picked up. I can’t remember how she fought but I knew she was a big fish and once in the net I became convinced it was the Pike I’d dreamed about for three years. The scales agreed swinging round to 20lbs 6ozs and as I was a fan of statistics back then I recorded a length of 38 ½ inches with a 20 ½ inch girth. I had to sack her up then cycle a mile to get a mate out to take the photo’s. These were a bit of a disappointment, too dark but at least they were focussed and you could see a nice fat gravel pit Pike. 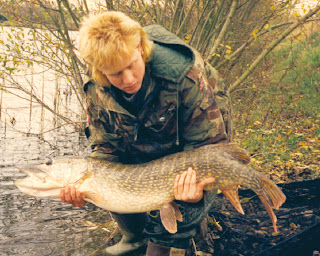 November 1987 I’d been inspired by the classic book “Predator becomes the Prey” by Bailey & Page to try and catch a fish over 25 pounds. This great book had set this as a new benchmark, a really BIG Pike. There was one pit on my radar that held a known fish of this size but she was a wise old girl and only came out a couple of times a season. My friend Giles hooked and lost her on a Jack livebait but that was a close as we’d come in 1986/87. The following season I was determined to track her down and managed to do so on my first visit. I managed to make a mess of the maths and initially told my pals she weighed 23 but I’m positive she was actually a pound heavier. I stuck with 23, it didn’t seem to matter.

Once I’d caught that fish I decided I didn’t want to fish that lake again, no need. However three weeks later heavy rain had flooded the valley and this was the only pit unaffected so I went back and caught the same Pike again. This time she was full and weighed 25.04 and that little target had been achieved. Both times she graced my net she took a ledgered Sprat injected with “Biotrak”, the trendy additive of the time which was promoted by the late Len Head. (Please excuse the big 80's hair-do). 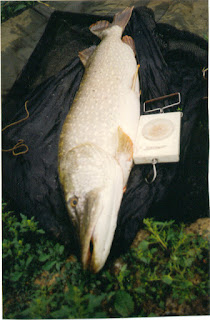 In the late eighties a large water in Suffolk was a prolific Pike water which attracted anglers from all over East Anglia. As the years passed the numbers of Pike declined but as is often the case, those that remained grew larger. In the five years or so I fished the water it probably held more twenty pounds Pike than at any time before or since. Being used to smaller gravel pits we struggled with the vastness of the place at first but gradually began to learn our way round and catch a few big Pike. In September of 1990 I started my Pike season earlier than most but the weather had told me it was time. I fished a favourite swim, relatively shallow and narrow for this water with a pronounced feature. I remember hooking a fish early on, it felt decent but came adrift, would I get another chance? The day was bright and breezy, good autumn conditions, surely the Pike would be active?

At 0845 my indicator sounded telling me something had picked up a ledgered Herring. I set the hook quickly and was soon involved in a right ol tug of war. The Pike in this water always fought like stink, the equal of any Pike I’ve ever hooked anywhere. This one sped along the surface sending a plume of water feet into the air then leapt totally clear of the water at about thirty yards range. It was obviously a good un but it was a surprise when she grew at the net. She was long, lean and flawless weighing in at 22lbs 7ozs. Unfortunately I was fishing alone and the only photos I have are of her laying on the unhooking mat.

After that I began prebaiting that area two or three times a week through the productive autumn period. The plan worked, I consistently caught big fish throughout the autumn including two more over twenty pounds. I done this for four consecutive autumns it involved a bit of effort but I caught stacks of big Pike up to 23lbs during that time, usually fishing short sessions which fitted in around the shift patterns I was working. Maybe I hammered the swim a bit too much in hindsight but at the time I figured that if I didn’t, someone else would. 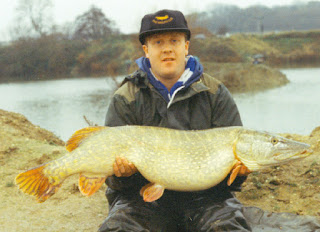 I wrote about this capture before, it appeared in Pikelines in the early nineties. This pit and I went back a long way, it’s one of the places where I learnt to fish for Rudd, Bream and once I even caught a Pike. In late 1980 I saw a guy called Bob Copping, the Suffolk RO, catch a huge Pike of 27lbs+. This fish inspired me to become a Pike/specialist angler and probably shaped my adult life. It was at this pit that Bob and other PAC members taught me to fish for Pike.

Fast forward to 1992 and this pit is pretty much off the Pike anglers radar but I’d heard a whisper of a low twenty so decided to have a little look. Before I actually fished I spent time looking around and began to prebait a deep area beside an island. It was here that I fished on 22nd November and had instant success with two short fat Pike of nine and ten pounds within the first hour. Time passed but I was content to sit it out, hopeful that another Pike or two would appear. Two friends had arrived for a chat and while they were there, at around 1230 a sprat cast to the island was picked up and I bent into a heavy fish. It was obviously a good un and when the fish swirled close in I said “That’s my biggest Pike”, I was right. She was another short, enormously fat Pike which weighed 26lbs 14ozs. I was delighted, not just because she was a PB but because of the plan. Find a water with potential, prebait a likely spot for a couple of weeks and then bingo! 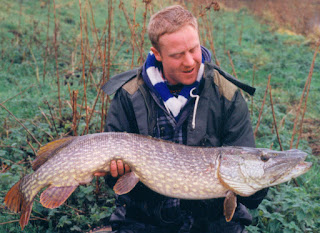 As I grew up fishing mostly stillwaters so I usually fished in a very stationary style, often spending all day in just one swim. In the early nineties I began fishing more running water, the Fenland rivers in particular which saw me gradually learn to adopt a more mobile approach. In truth it took me years to adopt a proper lightweight mobile approach and I never rarely got it right until I started boat fishing but back in the mid-nineties I was learning many lessons.

We’d discovered one particular small Suffolk river was in good Pike fishing form and began visiting it regularly hoping to find a few of its Pike. This we did and one stretch in particular held our attention, covering a couple of miles it was full of features and also home to a few whackers. It was late November 1995 and I set up in a nice looking spot, a confluence of waterways with plenty of features and scope. I had a couple of fish on Mackerel early on then it all went quiet. After a couple of hours I decided on a move so wound my rods in so I could walk up and have a word with my mate Ian, let him know what I was doing. I’d only taken a few steps when I saw a large boil on the surface, just up river of where I’d been sitting. I decided to stay put, repositioning one rod, now baited with Sardine, to cover the fish I’d seen.

Time passed, I began to get that feeling… had I spooked that fish? Had I blown it? At 1245 the sardine float slid off and I was soon into an obviously big fish. I remember her pulling hard in the weedy river but somehow she ended up in the net, obviously my first river twenty. She weighed 22lbs and I was delighted. That was the culmination of three years fishing almost exclusively rivers, (four in three different counties) in search of a river twenty, catching a few good uns along the way but finding the right river was the crucial thing.