Out with the old

As I sit at the keyboard tonight, it's late December, it's still hellishly cold, Lakes and rivers across the country are frozen solid. It's looking unlikely that I'll get out and on the river before the new year. As good as time as any to have a look back at what went right over the last twelve months as well as what I managed to cock up.

The year began Pike fishing at my favourite place and it was very slow and every fish hard earned. I caught a few but nothing massive and as always, loved every minute. The spring and summer was mostly spent fishing a new water for Tench and whatever else happened to take my bait. I managed to catch Rudd, Roach, Perch, Pike, Bream, Carp and yes a solitary Tench, my second best ever. Hard fishing but stimulating. Highlight of the summer was a successful trip out west which resulted in my first ever Barbel. The Autumn was once again spent Pike fishing with a bit of success until this current cold weather brought everything to a stand still.

I'm not the slightest bit interested in turning up at the some hole in the ground, casting out and winding fish in. Wherever I'm fishing, for what ever species, it has to be interesting. Just about everything I've done this year has ticked the boxes so it'll be more of the same next year. I will continue avoid the most popular places and carry on doing my own thing with my own goalposts.

Another year has just about passed and as usual I've loved spending spare time in beautiful places, trying to catch fish. Below are a few favourite photos from 2010. 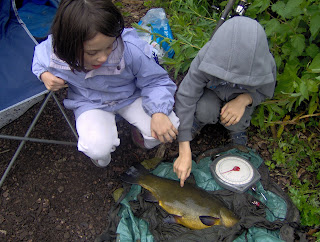 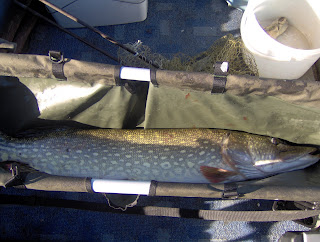 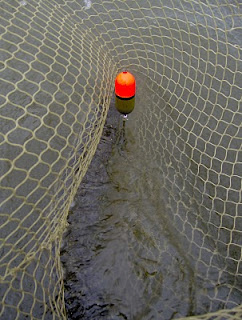 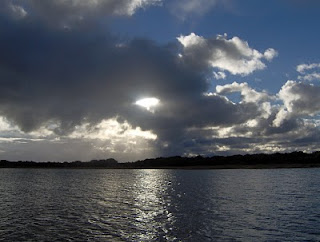 Posted by Michael Hastings at 13:08 No comments:

Cold with a capital F

We've had three weeks of sub zero temperatures, snow, ice and all the crap that goes with it. When there's been half a break in the weather I haven't had the time to go. When I do have some spare time the weather is freezing. I thought I might have a go at “The pool” recently but the lid didn't come off. I should really make the effort when it finally does, but maybe then I'll have the time for... This weekend could have been a window of opportunity but the forecast is for heavy snow and more FFFreezing temperatures. Then there's the whole utter madness of the brain dead Christmas rush around. I suppose I'm going to sound like Mr Scrooge now but it's driving me fucking nuts. As the year winds down, everything and everybody speeds up, running around like demented morons because the shops will be closed for one day! Must get stuff, any stuff will do. Stuff, stuff and more stuff. Then get in the car, sit in traffic until the conveyor belt reaches another shop, then more fucking stuff. Thank god for online shopping! Even with this wonderful life saving creation, actually going shopping cannot be avoided. Stir crazy, going nuts. Best look on the bright side. At least the waters will have had a few weeks of rest, as have I.

In the autumn there was a load of talk on the fishing forums about traces and hooks for Pike. Single hooks are the big talking point at the moment, some anglers are advocating them as a viable alternative to trebles. Some fisheries are promoting them as being more “fish friendly” than trebles being supposedly easier to unhook and this I find worrying. One high profile day ticket fishery has banned trebles and insisted on singles as a measure to protect their stocks of predatory fish. Other similar fisheries have talked about this idea too. The use of a single hook will not stop an idiot from damaging a Pike. OK this idiot may arguably do less damage with singles but it is wrong to legislate against any method when the real problem is bad angling. These day ticket fisheries would do better to have pro-active bailiffs on the bank to educate people and enforce the rules already in place. Maybe this is too expensive but they could fund this by not advertising the Pike fishing in their water as this ruins the fishing quicker than anything! Good fishing doesn't need advertising, it speaks for itself.

I'm not against using single hooks, if an angler is confident in what he is doing and happy with what he catches then good luck to him. A good friend of mine has been using singles almost exclusively for two or three seasons now. He has his own method of doing it, which makes sense and he believes this has improved his hook up rate and I can't argue with that. He's landed some very big Pike on his methods, enough said. What I do find annoying are anglers who preach that single hooks are the way to go for the “fish friendly” reasons that the day ticket waters hide behind. I don't like this one-upmanship. Use them if you want, don't tell me I should be for moral reasons. Pike anglers have enough restrictions without imposing our own.

I may give singles a try sometime but when it comes to livebaiting then it's trebles all the way for me, Owners in size four or two. It's a confidence thing for me, trebles work and the way the bait is hooked I struggle to see a better way. I rig them up the way Dave Horton does it, with the bottom treble sliding as described in "Ultimate Pike". For most of my fishing I use deadbaits. I've used double hooks since 1987 and although I've occasionally dabbled with combinations of double and treble I know feel totally confident using a twin double hook trace. Maybe they're easier to unhook than trebles? Maybe not. Partridge or preferably Drennan in sizes six, four and occasionally two. For what it's worth the wires I use are ET's Mr Softee with a breaking strain of 35 pounds for deadbait rigs and Mason's Multistrand in 30lbs b.s. for livebaits. Below, purely for the sake of it, is a photo. Oh, the silver ball thing on the livebait trace is one of ET's rig rattles. Do they make a difference? Who knows, I think they do and they certainly don't hurt. 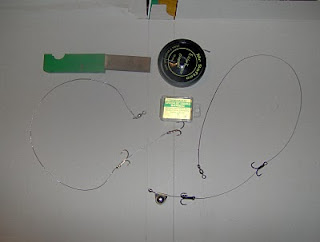 24 hours later and the latest five day forecast looks even worse, it's minus bloody six out there! It's highly unlikely I'll fish before Christmas, maybe I'll get a chance over the break but before we know it the new year will be here. Then we start to count down the weeks before the season closes. Before we know it, spring will be here. A nice thought when it's cold outside. I want to catch some more Pike first though! Here's to milder weather ASAP.