Where does the time go? It dawned on me that almost a month had past since I last wet a line. In that time the summer party season has still been in full swing, I've been emotionally involved in watching England become officially the best cricket team in the world and I've been rigging up a new boat, with help from Rich. Apart from that I've been in a kind of limbo. My mind is on Pike fishing but it's still too early. I still have my Carp/Tench kit ready in the shed but I don't have any enthusiasm for this type of fishing. However this past weekend I felt the pull of the water side and just had to spend a few hours down by the lake, any lake but what should I fish for? In the end I decided to hedge my bets.

I arrived at 'the marsh' at around 1530 on a blustery autumn afternoon, there was only one other angler present, bivvied up on the far side. The sky was mainly bright but the fresh westerly wind was pushing clouds across and the forecast threatened rain. I picked a swim in the teeth of the wind and began by setting up a boilie rod. I fished a 'Chod' rig and pop up cast a short way to a point in the reeds and baited the area with around 500gm of 10mm boilies. My second rod was a float set up with a waggler fishing sweetcorn on the lake bed in front of some dying lilies. This area was baited with 'Green Carp mix' made by Lake Wizard, to the mix I added half a tin of corn. It was inevitable that I would catch Rudd and Roach so I had decided to embrace this and try to catch the blighters. Maybe a Tench would move into the area, who knows?

As I was setting up a Heron flapped noisily into the Lily pads opposite me, hopefully we'd both have a little luck with the fish this afternoon? The float began dipping and moving straight away, as expected. I kept striking and missing but eventually hooked a couple of small Rudd. These fish were obviously intercepting the corn as it sunk. A little adjustment of the shot and I was able to avoid these critters. While I was doing this I noticed movement out of the corner of my eye, something on the surface, 'what the hell is that?' I wondered. It was a snake, a Grass snake I assume and a very rare but welcome sight. The animal swam across the front of my swim, paused amongst the lilies for a rest before going off again and disappearing amongst the bankside vegetation. 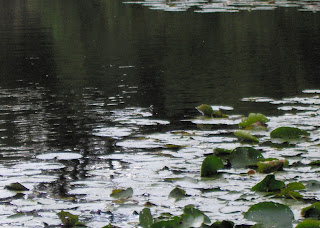 The shotting change worked, bites became irregular but when I connected the fish were a better size, Rudd and roach of 4 to 8 ounces. Why can I never get enough of these when the Pike season starts?? The weather was pleasant and I sat comfortably in my chair with cricket on the radio, TMS my regular companion painting the picture of a tight game. Away to the south dark clouds were dropping rain on someone but I admired the resultant rainbow. The boilie rod was absolutely silent but the float dipped regularly enough to keep me on my toes. I was going to say 'keep me interested' but to be honest, I was in danger of being bored. This kind of fishing doesn't hold my attention unless there's the chance of something substantial taking my bait. Yes there was that chance but I just didn't feel it was going to happen.

With all those Rudd and Roach kicking around in the net and a spare rod laying in the holdall it was only a matter of time...I couldn't resist! Float, traces, lead and link. A paternoster rig was born, baited with one of the smaller Rudd and gently swung out into the deeper water beyond the pads. The bait was lively and kept the float bobbing and dipping which renewed my interest but as the time ticked round it appeared this wasn't going to work either. It just wasn't going to be my day. Then it's been that kind of summer, the effort I've put in has been sporadic as have been the results. I haven't enjoyed the fishing at the Marsh as much this year, early season it was just too crowded. I haven't really fished the place as effectively as I could/should have either. Shall I give the place another go next season? Probably, one last season. Elsewhere I caught plenty of Carp from 'The Puddle' but I only went here as light relief when the Marsh had proved hard going, which was often to be honest! 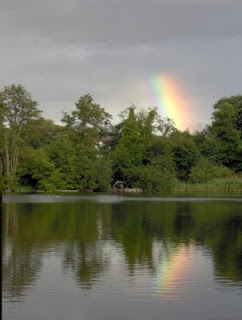 The sun was dipping and a full moon had risen away to the east. I packed up the float rod before it became too dark and then reluctantly tidied up first the boilie rod then the livebait. I always hate packing up, even when the fishing hasn't been riveting. This time I was packing up not just for the day but for the summer season. Soon it will be Pike time and for a variety of reasons I've decided that very little of it will be blogged, not this year at least. To pretentiously quote the Prodigy from “Music for the Jilted Generation”

“I've decided to take my work back underground, to stop it falling into the wrong hands...”