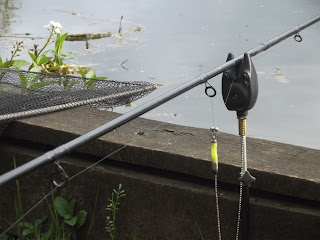 The weekend arrived and the main event was a BBQ with old friends.  This included mountains of food and gallons of beer so there was no way I’d be getting up at the crack of dawn.  Instead I was out and about around midday and after chatting to a friend fishing for Carp I eventually found myself at the Tench pit in mid afternoon.  I had a swim in mind and it was free but there was another angler nearby which meant I’d have to alter plans a bit.  I spent a while with a plumb rod and located the edge of a plateau but decided chucking feeders here would probably infringe on the other angler.  Apart from that I really liked the look of the tree and reed lined margins so it was here I decided to begin fishing.  The afternoon was mild and cloudy with a brisk westerly wind blowing into my face, pretty good conditions?  We’ll see…


I tackled up with a 10mm boilie/ fake corn on one rod and an open end feeder with maggots on the other.  The groundbait was my favourite Expo with added crushed hemp.  I dropped the boilie along the treeline to my left and the feeder in front of the reeds to my right.  After a few minutes I asked myself “What the hell am I doing?”  Why on earth was I not using the float rod I’d brought with me?  So a few minutes later I’d repositioned the feeder to the tree line and was float fishing in front of the reeds. 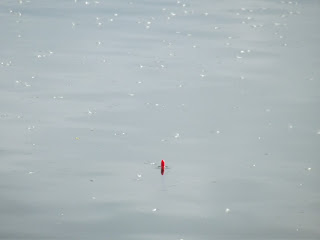 I’ve got out of the habit of actually catching fish so was a little surprised when the float began to dip!  The result was not the Tench I hoped for but a spirited little Perch which was quite welcome after my recent run of blanks.  Bites came along regularly and I managed to catch a succession of little Perch but not so regular that they were annoying.  I kept recasting the feeder and gradually put a bit of groundbait down there but apart from the occasional nipped maggot, nothing occurred.


Around 1900 the other angler departed so I replaced the float rod with a boilie and PVA bag of pellets, positioned on the edge of the plateau.  I’d enjoyed the float fishing but was happy to sit back and relax in my chair with two rods on alarms.  At around 2050 the micron sounded a take at last!  The feeder rod was away but the result was another Perch, albeit the biggest of the day.  As the light faded I had two more twitchy takes on this rod but failed to connect with either.  I packed up by torch light, no Tench but I’d enjoyed myself. 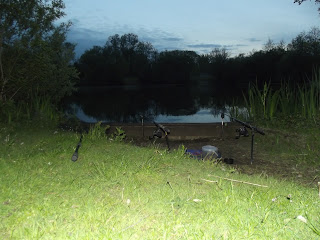 I returned a week later and this time I did manage to drag my carcass out of bed on a warm, still and cloudy morning.  I fished a different swim this time and covered the edge of the plateau from a different angle.  As I tackled up a cuckoo welcomed me to the lake.  Once again I used an open end feeder with a couple of maggots and a bit of fake corn on a 3” hooklength.  On my other rod I float fished maggots next to the lily pads, if the Tench had read the text books I’d be sure to catch!  I dropped the occasional small ball of groundbait here but mostly fed pellets, a small handful with every cast.

The float began dipping from the off and I caught loads of Perch and Rudd on the red maggots.  It was fun to begin with but I doubted my bait would stay in place long enough for a Tench to discover it.  Rooting around in the bag I found some Marukyu fake corn which is very soft and realistic so I gave this a go.  Although I’ve caught fish on this in the past today it slowed the bites down to a full stop so every now and again I’d have another chuck with maggots and catch a few more fish.  Meanwhile I was recasting the feeder regularly, landing it in the same spot and hopefully building up a bit of bait for the Tench to home in on.

Around 0645 the float rod hooped over and for a second I dared to hope… but no, it was a Bream.  Switching back to maggots brought more Perch and a silvery surprise in the form of a Dace which must have found its way into this pit from the river at some point.  The feeder rod beeped and bounced occasionally but nothing took enough pity on me to hang itself.  By 1030 I knew the children would be up and about so it was time to pack up and head home.  I’ve got back into the habit of catching fish, just not Tench.  No change there then. 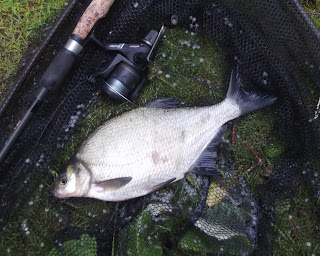 Posted by Michael Hastings at 15:03 No comments:

I haven’t had any time lately, not just for the usual reasons but also because I find myself helping out the 13th PAC committee which took over the reins a couple of weeks ago.  More about this here; http://www.pikeanglersclub.co.uk/thank-you-12pac-hello-13pac/

During the winter I got back into the habit of nipping out with a lure rod when I had a couple of spare hours and that is the only fishing I’ve managed to do lately.  I know a nice feature packed pit with lots of weed growth and clear water and I felt confident this would fit the bill for a bit of spring sport.  Either I’ve got this prediction badly wrong or more likely I’ve forgotten how to fish with lures.  Not that I’ve ever been particularly good at lure fishing but more often than not I’ve usually managed to put a lure passed a Pike that has been desperate enough to eat it.

My first trip saw me mostly using one of Dave Greenwood’s “Slither” glidebaits and I did tempt a fish into taking a couple of lazy swipes at it without hooking up.  The next time out I hooked a Jack on a spinnerbait buzzed through the lily pads and got it almost within reach before it twisted itself off.  I thought I’d cracked the method and for the next couple of trips I thrashed the lilies to the proverbial foam without moving a single Pike.  To be fair I did spend a lot of my allotted time chatting to friends on those two trips.  By now April had turned to May and I still hadn’t managed to catch a fish of any kind since 14th March.

Desperate times and all that…  Sunday morning saw me taking Isaac and one of his friends maggot drowning on a little pool that should guarantee a fish or two.  After the lads had managed a fish or two using whips I baited up a waggler rod & flung it out.  After a while the float appeared to be moving and I set the hook and wound a very small pale looking thing towards me.  As I swung the tiny fish towards my outstretched hand it looked decidedly Perch shaped but was almost transparent so maybe it was a Ruffe?  I’ll never know as it wriggled and dropped off into the water in front of me.  It would not count in a match but I felt in the circumstances I’d done enough to claim the capture and I like to think it was a Ruffe simply because I can’t remember the last time I caught one.

So with my duck broken I made another attempt fishing lures on the pit confident that I was on the start of a roll and my first Pike of the season would be a formality.  I should have known better.  True I did spend a bit of time chatting and yes I did tempt a Jack into chasing the spinnerbait and making a fool of me.  Any sensible person would give this up as a bad job and go fish somewhere else so I suppose I can’t be sensible because at times like this I’m just stubborn and find myself plotting and planning.

What I really want to be doing is attempting to catch Tench and for the next month I will hopefully be spending some time doing just that.  With my track record for catching these things and the fishing form I find myself in, what could possibly go wrong?

Meanwhile… Thankfully the situation in Norfolk seems to have calmed down with no new reports of dying fish.  The BA have finally got in the act by offering to help clear up the dead and rotting fish, wouldn’t want any holiday makers getting upset would they?  The EA netting teams have been brilliant and the guys on the ground are owed a debt by anglers.  However other people within this organisation really ought to take a long hard look at themselves.

Unfortunately there has been another fish kill in East Anglia, this time on the Suffolk Stour, more details here;

As I don't have any pictures that are remotely fishy here's some Charlatans instead.

Posted by Michael Hastings at 15:35 No comments: