The Pike strikes back

I keep reading on Facebook and forums that in order to achieve safe bite indication when Pike fishing I need to use a lot of lead.  I read that 3ozs is considered pretty much standard these days, regardless of the conditions.  I can’t remember the last time I felt the need for a 3ozs lead and I’d guess I’d use that much weight a couple of times a season at most.  I don’t often need to fish at long range and I rarely fish in a heavy flow these days.  I always work on the principle of using as little weight as possible and when fishing weedy water I often use none at all, relying on the weight of the bait and a float of course.  I want the Pike to feel as little resistance as possible and this does not cause any bite indication issues because I watch my floats.  However if I’m in the boat and can’t see the float I do add weight but rarely more than a couple of ounces.

Back in the early eighties it was common practice to freeline deadbaits.  We’d cast our half Herrings out, wait as the bait sank then carefully tighten the line.  Bite indication was the original optonic and a home-made bobbin crafted from string, a wine cork and a hair grip.  Now I can accept there are better ways to do this but you know what?  It didn’t cause strings of deep hooked Pike because the indication was crude but actually worked.

I think the whole 3ozs lead thing may have come about because modern anglers have become used to relying on alarms for their bite indication.  It’s sensible to clip up tight to a heavy lead if you are not actually looking at the water and many anglers like to bivvy up or socialise on the bank these days.  However, I think there is a better way.

Another thing that gets the Pike police going is spring Piking.  Many say that as soon as there’s a whiff of spring we should all jack it in so the Pike can spawn in peace.  The facts are Pikers have fished at spawning time for decades, many crossed seas and borders to do so.  There doesn’t seem to be any evidence that this practice does any harm.  Let’s face it; before they spawn they are very finicky.  When the Pike are actually spawning they don’t want a bait anyway.
After spawning, if your timing is right it is well worth a visit.

None of this had any bearing on a decision to fish for Pike today, the third weekend in March.  I had a half arsed plan to dispose of my remaining deadbaits by soaking a few of them in a large stillwater that I haven’t fished for a long time.  Rich had a similar plan so as we couldn’t remember the last time we had fished together we decided to team up and have a relaxing social trip.  The weather in these parts has been stuck for weeks with a high pressure system bringing North Easterly winds and uninspiring temperatures.  We met around 6am, yomped away from the car for a mile or so then gradually fished our way back.  The weather was shit, the cold wind in our chops and we blanked.  As ever we put the world to rights (the tories are proper bastards), relived the nervous Grand slam match and the shocking T20 win.  We also made plans for some spring fishing that will be a complete change for both of us.  It was a really nice way to end the season.

Every now and again I am lucky to fish in the company of Mr N and equally fortunate to visit a lovely water that I call ‘Ted’s place’ and a few weeks ago we spent another great day afloat.  On the evening before I was buzzing, despite feeling dodgy and despite the miserable weather forecast.  As usual in such circumstances I barely slept and was out of bed before the alarm went off.

We met at 0630 and we were afloat by 0700, thankfully the rain held off but we knew it wouldn’t last.  We fished three deadbaits each and spent a highly enjoyable day getting blown around and thoroughly rained on.  The chat flowed easily, the world was put to rights and we laughed regularly. I think I had the first take but managed to lose a Jack then Mr N did exactly the same.  I then struck thin air before the duck was finally broken.  After that we caught fish regularly and the average size was pleasing.

Around 0930 I hit into a Pike that was clearly a better one, it took a Mackerel at close range and was bundled into the net quickly where it grew into a camera and scales fish.  The hooks came out easily, the scales made me grin and I held it up for the camera.  This still lively fish gave a big twist and managed to head butt me right in the kisser, busting my lips and drawing blood!  I didn’t care though, happy days. 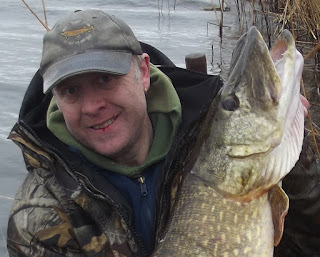 We moved regularly and the sport continued, in the early afternoon the rain stopped and the sky cleared.  The fishing slowed a bit but not much.  In the mid-afternoon I hooked another big fish on a close range Mackerel and this too was in the net quickly.  I decided to unhook it over the side and with my hand in its gill it twisted and thrashed, skinning my knuckles, twisting my fingers and leaving me bruised and in pain.  Bleeding, swollen knuckles and a bust lip, I looked like I’d been fighting but I still didn’t care.

Mr N finished the day with two more good fish and together we had another combined total well into three figures.  I’d been lucky to catch the two best fish but Mr N had put me onto them, all I’d done was cast out and reel in.  It doesn’t really matter which way the luck falls.

These all action days are rare for me and I don’t take them for granted.  It’s been a mixed winter for me, lots of searching around for little reward but a good decision or two and a bit of luck has made it into a smiley one.  Once again most of my Pike fishing this past season has been spent on a big wet, hostile marsh, struggling to find an ever decreasing head of Pike.  There was a strange feeling about the place this season.  It was difficult to stay confident at times and the weather always seemed gloomy.  The sun rarely seemed to poke through and I hardly saw the spectacular flatland skyscapes at either end of the day.  And by God it was tough! Why do we do it?  Well it’s not the fish, it’s the fishing.  You’ll either get that or you won’t. 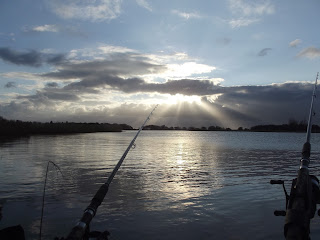 Posted by Michael Hastings at 14:34 No comments:

Politics, hypocrisy, double-speak, stupidity, madness.  I'm sure I've used all of those words when talking about the Broads Authority over the last few years but sadly anglers in other areas have to put up with the same kind of bullshit.  In Northern Ireland PAC' region 43, led by Colin Rutherford and Steve Powell are campaigning to protect their sport on the Erne system.  South of the border Kenny Sloan has video'd gill netting by the IFI.
Please click the link below to 'Lumbland' where Dave has his say, then watch the video.

All of these  ridiculous examples of ecological mismanagement are actually costing tax payers money.
Posted by Michael Hastings at 14:26 No comments: