The coming of spring means it’s time to begin a period of masochism as I take on my nemesis, Tench.  I think I enjoy fishing for the red eyed slimy greenbacks because I am so hopeless at catching them and I find challenging fishing so much more interesting, I may have mentioned that before...  This year I have three, (count them; one, two, three) new waters to have a go at.  The first is a pit that has actually been stocked with Tench in recent years and I should have a realistic chance of catching one or two, despite never having fished it before.  The second is an old lake with a long history of good Tench fishing but this has suffered the attention of the furry hell hounds in recent years.  I may not get round to trying for these fish this year but this water has other attractions.

The third water is one I fished a lot for all species in the last century but never managed to catch a Tench from.  This place is by far the most challenging; a big, deep and mysterious lake, but reports in recent years suggest Tench have become a viable target.  However if I manage one greenback from here this year I will consider it a result.  Happily there are other diversions to entertain me while not catching Tench, the Roach fishing is also very good.  If I’m a bad Tench angler then I’m a terrible Roach angler although to be fair, most of the times I’ve targeted them it has been done with the intention of putting them in a bucket.  In all my (almost) forty years of angling I can only recall catching two Roach that weighed over a pound, my PB standing at just 1lb 4ozs.  Angling is so often about timing, good fishing can be cyclical and being on the right water at the right time is key.  It has become apparent that the Roach fishing on this water could be too good to miss.

So where should I start this spring?  Maybe the sensible thing would be to have an early crack at the pit as a confidence boost before I move onto more challenging fishing.  I rarely do sensible so it’s feet first onto the big lake then!  I had a few clues as to where Tench might appear and made the effort to visit a couple of times and walk the banks without tackle.  One area I visited looked pretty but didn’t say “Tench” to me but what do I know?  As much as this area felt wrong the second place felt absolutely spot on.  This is a large bay with depths down to 25 feet in the mouth but overall averaging about 12 feet and a lot of water which is much shallower.  There is evidence of weed growth already and lots of willow roots for Tench to spawn in.  It was also a beautiful, quiet spot to while the hours away in.  This would do for now!

April arrived with winds from the East but mild temperatures.  I told myself there was no time like the present, the shallower water of the bay would be warming up in the spring sun and I would be in with a chance.  A lot of my Tench fishing in recent years has been with boilies and hair rigs but with the bonus Roach in mind I didn’t want to fish this way.  It was time to dive in the shed for a rummage and see what I have to hand.  Eventually after much shifting of dust I came out with an old 11ft Tricast 2lb test rod, a Daiwa Barbel rod, my one and only feeder rod and for float fishing the 11ft pellet waggler.  The lake is snaggy and I see no point in hooking fish only to lose them so my default setting is to go heavy.  Two suitable reels were already loaded with 12lbs mono, that would do.  These were screwed onto the Barbel rod and the old Tricast.

A bit of research and reading had convinced me to use feeder rigs and red maggots on the hook.  After a quick search of “Lumbland” I found a helicopter set up to copy, I twisted it a bit but it’s still basically the same, thanks Dave.  I tied up some size 16 Matrix ‘feeder rigger’ hooks onto 6” hooklengths of 0.20mm line, which is 9lbs breaking strain in real money.  I’ve used the Matrix hooks for a couple of years; they are big and strong and have never let me down. Groundbait would be a mixture of Expo, brown crumb and crushed hemp with maggots and casters added.  I know a proper Roach angler would not know whether to laugh or cry at my methods but first and foremost I want to have a good chance of landing a big Tench.  I’ve also learnt that hungry Roach aren’t always shy of crude tackle having caught many by accident while Tench fishing.

So I was all ready to go and feeling enthusiastic although not motivated to leave my warm bed at an early hour.  I figured the best chance of fish would be after the sun had warmed the water for a few hours and the afternoon into evening would be the best time.  Rich agreed with me so we met at the big lake around 0900.  After a quick walk around we settled into two swims that would put us in shelter from the brisk Easterly wind.  There were signs of post spawn Pike in the margins and I had intended to use my normal counting down lures method of plumbing.  Unfortunately I’d forgotten to bring the lure rod so I had to use the old fashioned plummet and waggler method.  This revealed what I expected; a gradual slope into eleven feet of water at about thirty yards, the shelf was less steep on the left side of the swim so I decide to concentrate here. 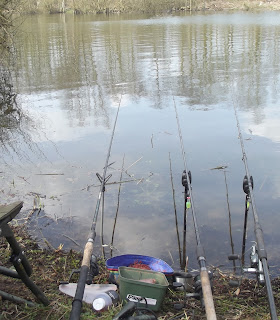 By 1000 I had two feeder rods fishing, one at about twenty yards in eight feet of water the other at the bottom of the shelf.  Both were clipped up, the plan was to keep landing the feeders on the same spots, time after time and gradually build up some feed.  Next door Rich fished a mixture of baits and methods so between us we hoped to find out what worked.  The bay was a lovely place to relax, even in early spring it’s a beautiful spot.  The only thing it appeared to lack was fish, of any kind.  This didn’t deter me too much, in truth I didn’t expect to catch a great deal.  Today was about dipping my toes in and getting a feel for the fishing, the first step on a road that I hoped would lead to Tench and big Roach.

So it was a great surprise when after just an hour, the closer rod signalled a steady take.  I struck and the Barbel rod thumped over, held then thumped again as a fish started to slowly take line.  For a few seconds something heavy plodded around and then it all went slack.  I wound in to find the 9lbs hooklength hard parted.  What had I been attached to?  My first instinct was big Tench.  There are very few Carp in this water, it could have been a big Eel, maybe even a Pike but still I thought Tench.  I should have felt gutted but this was tempered by a massive confidence boost.  There were fish in the bay! 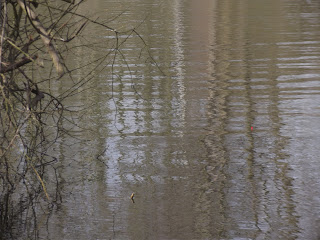 I got a fresh rig back in the area as quickly as possible and put a third rod out fishing maggots on a waggler close in.  Would this be the start of something?  After that nothing happened for hours, once again it seemed like the only fish in the bay were the Jack Pike that kept swimming passed our feet.  Undeterred I kept doing what I was doing, putting the feeders on the spot regularly and hopefully building up a nice banquet for any fish that might move in.  I was really enjoying the fishing and still felt confident.

In the mid-afternoon the sun was smothered by a blanket of cloud and some annoying drizzle started to fall on occasions.  But the good news was fish were showing, there were Roach in the bay too.  This was confirmed around 1600 when Rich hooked a decent fish on maggots.  His quiver rod was bent over nicely and we were eager to see what was on the end.  We never got the chance as the hook pulled allowing what was almost certainly a good sized Roach to escape.  Shortly after this I managed to chuck my waggler into a tree.  Was it going to be one of those days?  With no suitable floats spare I changed this rod to a maggot feeder with an 18 hook on a 4lbs hooklength and pinged it into the area I had baited all day.  Rich started to get a few taps and rattles on his quiver tip and it looked like he had some feeding fish in his swim.  He was fishing a lot lighter and more sensibly, were the fish laughing at the crude feeder rigs on my other two rods?  We were still fishless but still confident and I was sure something would happen, a few more fish were showing themselves now too. It struck me that the birdsong had been constant, all day without let up.  Lovely!  Here I was fishing feeders for Roach of all things!  What’s more I was thoroughly enjoying myself!

Around 1700 I finally had a bite on the longer range rod.  I struck a twitchy take but there was nothing there.  An hour later it happened again, should I let these things hang themselves instead of striking rattles?  This signalled the start of a feeding spell, I had short pulls and tip rattles regularly and at last some proper bites.  At 1820 I finally hooked another fish.  Despite my totally OTT tackle this fish was obviously a decent size and despite being out matched it didn’t want to give up easily.  However within a few seconds I had it in the net where Rich and I admired a large, almost fin perfect Roach.  I didn’t have the first clue just how big it was so out came the scales which surprised us both by swinging round to a healthy 1lb 8ozs.  I had a PB Roach at the first attempt! 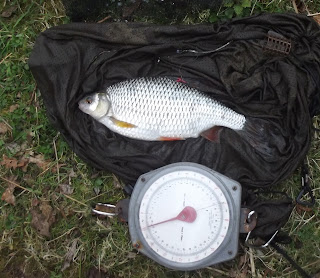 Rich was gutted, not because I had caught but because he had to pack up at and at this moment things looked better than they had all day.  I decided to fish on into the dusk period and this was rewarded half an hour later by another proper bite, this time on the maggot feeder I’d hastily chucked out.  I netted a second Roach that wasn’t as deep bodied but definitely a bit longer, the scales recorded exactly the same weight, a brace of PB roach!

Light faded and the rain increased, I tidied up all the non-essentials and huddled under the oval, staring out into the gloom.  I still received regular twitches and rattles and just wanted one more fish before packing up, nothing new there then.  At last the middle, longest range rod was off and running and I hooked another Roach.  This one wasn’t in the same league as the other two and didn’t require the net.  A few weeks earlier it would have been gratefully received and mounted on a Pike trace.  After that I slowly packed the rods away before loading up and yomping back to the car.  It had been a really enjoyable day and hopefully the start of some interesting spring fishing. 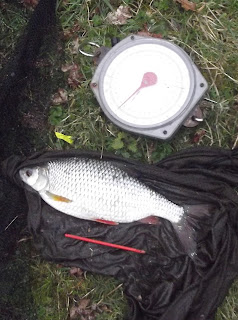 Posted by Michael Hastings at 13:00 No comments: