December is my least favourite month of the year.  We are bombarded by bullshit under the name of “Christmas” and I rarely get any time to escape from it all with a day on the water.  This December has been worse than ever and respite with rods was a prescribed necessity.  Rich and I have been friends on and off the bank for nearly thirty years and despite constant communication and spending most of our Piking time in the same places we hadn’t actually fished together, from the same boat for nearly eight years. So here we were on a gloomy morning, sitting in a boat on an ancient East Anglian water slowly tackling up and waiting for the sun to rise.

This trip had been long planned but had suffered from a couple of false starts but at last here we were.  I’ve fished this water a few times now but this was Rich’s first visit The light grew gradually brighter although the sun never appeared from behind the thick cloud but our floats stood out, little spots of colour amidst the gloom.  Half an hour after casting one of these tipped and slid away, Rich was away on Herring and soon chinned a small Pike out.  His first Pike from a special new water meant the camera had to come out before the fish was quickly slipped back.  Another half hour passed before we had a flurry of takes, I managed a nice fish on smelt while Rich dropped a jack and had another helpfully unhook itself close to the boat.  Things looked good for more action but things went quiet and half an hour later we were on the move.  Another half an hour in a new spot and I was away again with a similar sized fish on Herring. 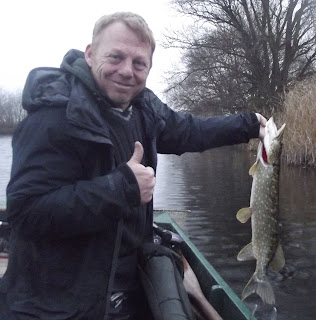 We spent most of the day fishing in the same way, every move seemed to bring a take or two but all were small fish and some shook themselves off before they reached the boat.  As ever the chat was constant; we lauded our Rugby team which seems to keep getting better and discussed our cricket team which is also improving, despite getting a hiding in India.  As always we talked about our first love in angling, why do we still keep struggling and battling away at the 'special place'?  I always liken the Piking here as being like playing cricket at Lords, nowhere else comes close.  Rich agreed but said at the moment it’s like bowling at Lords with the opposition 500-2!  Dinner came courtesy of an excellent recent purchase.  The ‘Ridge Monkey’ sandwich toaster is a brilliant bit of kit, providing a hot, tasty snack with the minimum amount of fuss, even in a cramped boat. 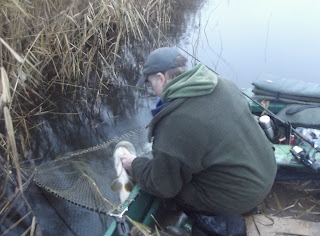 In the mid-afternoon we took a long row to an area I hadn’t fished for some time.  As we neared the spot we were heartened to see a few silver fish showing, more than we’d seen all day.  By now the clouds had sunk lower and were depositing annoying drizzle (it always bloody rains when I fish here!), it seemed as if dusk would come early.  It didn’t feel like good conditions but as we’d managed to pick a few fish off through the day we still felt confident.

Rich was the first in action, hitting a fish that put a proper bend in the rod for the first time today.  His first double from this water was soon in the net to smiles all round.  After a quiet half hour it all kicked off.  Rich again was into a decent fish which unfortunately threw the hooks on the surface.  Then it was my turn with a fast take on smelt, I wound down but felt nothing and retrieved a smelt minus its head! Rich had another aborted take and quickly got the bait back out but shortly after my Lamprey was picked up and after a good battle my first double of the day was in the net.  Minutes later the smelt ripped off again and for a second time I felt nothing and wound in a headless smelt!  I have a feeling something other than Pike may have been responsible?  I didn’t have time to think too long as a Herring cast along the near margin was away.  A nice fish tried to take me into the reeds but strong braid nearly always settles the matter and another double was brought to the boat.  As I was all out of Herrings I recast with another smelt, this had hardly settled before it was on the move again and I was attached to another, similar sized Pike.  By now it was growing dark and the threatening clouds had started to dump heavier rain on us.  We fished on for a while longer before calling it a day. 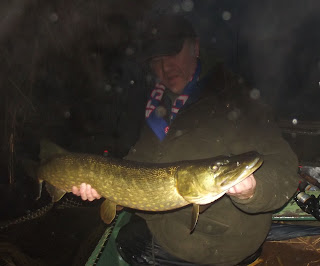 As I rowed back we reflected on an enjoyable day.  We’d caught fish on a variety of baits but Herring and Smelt had clearly produced the most; coincidence, positioning or preference?  There had been action throughout but that mad hour at the end had produced eight takes and all the biggest fish.  Had we finally located them in the afternoon or did the fish all over the water just switch on?  We can discuss debate and theorise but in the end we don’t really know and that’s the way I like it.
Posted by Michael Hastings at 04:47 No comments: