Well the monsoon didn’t materialise this June, it’s just been getting hotter and hotter and there hasn’t even been the scent of rain but tonight its humid, it feels like a storm is on its way…  Fishing time lately has been limited to a few short evening sessions.  The first was a glorious evening after Tench at the big water, I fished a swim between two snags with 10mm tuttis on one rod and float fished corn on the other.  At no time did I feel a fish was likely but it was lovely sitting by the water. 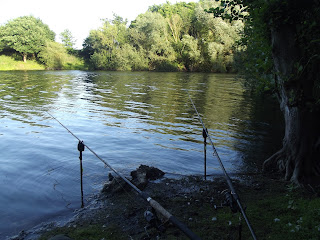 The next two were spent out in a boat with Giles.  On the first we worked hard chucking lures around on an almost still, flat evening.  Although conditions were a lot more comfortable than the last time we’d fished the Pike weren’t really up for it.  We had to work hard and only managed one take each despite covering a lot of water.  Both were Jacks but thankfully we managed to get both to the boat.

While all this was happening England’s ODI team was absolutely rolling with three convincing wins.  Then they bumped into a Pakistan team that started shambolically but kicked into gear.  The semi final was an echo of the ’92 world cup, when they are good Pakistan are unstoppable and their bowlers always do well on English wickets.  The best team won the tournament. 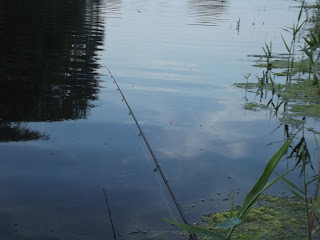 A long very hot week later and we figured the water temperatures were just too high for Pike fishing so decided to float fish for whatever came along.  On this evening there was a surprising cool North Easterly and as we sat there was plenty of Pike activity!  A bit of groundbait brought loads of silver fish along too.  Giles caught consistently by switching depths and baits.  These were mostly Rudd but there was the odd Roach and a few Perch thrown in too.  I caught a few nice Rudd with corn float fished in mid water but spent most of the evening trying to keep a piece of fake corn still long enough to catch a Tench.  As usual my attempts to catch a slimy greenback proved fruitless.  I will be back!

Festival season is approaching so this was all the excuse we needed to load the car for a weekend of camping in Norfolk.  Of course this meant an inevitable change in the weather, gone was the hot, sunny and dry with more changeable weather on the menu.  Also on our agenda was a day in the boat, snapping photos and hopefully catching a few fish.  The Purple Princess and I studied the forecast, Saturday would be warmer but with the risk of showers, Sunday was said to be dry but a little cooler.  In the end we opted for Saturday and were afloat by 1130 in thankfully dry, pleasant conditions. 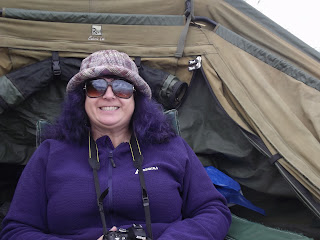 Forty five minutes after setting off I cut the engine and steered us into a bay sheltered from the south west wind.  Shelley’s camera had already been working overtime and was still clicking as I tackled up two rods.  Both had 30gm open end feeders fished on helicopter rigs.  The lighter set up of the two had a 16 hook and a short hooklength of about 4”, this was baited with three maggots.  The other had a longer hooklength, around two feet, with a 14 hook baited with corn.  The feeders were loaded with a right old Heinz 57 mix of groundbait then pinged to the same general area about twenty yards from the boat, lined up with a convenient tree on the far bank.  Having bought a new landing net a few weeks ago, I’ve been suffering a new tackle curse this spring and so far I haven’t actually had a fish in it.  Actually I should have netted a couple of Roach earlier in the year but as I was sitting right by the water I’d literally picked the fish out of the water and not used the net. 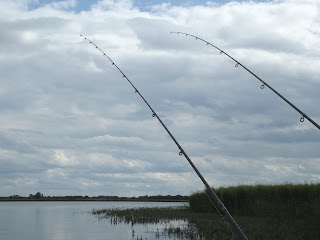 Often it takes a while for fish to find the bait but first chuck with the maggot rod and the tip bent round and I hooked a small Roach.  This happened on the next four casts with three more Roach and a Rudd swung into the boat.  The sixth cast brought another bite but this fish dropped off.  Things were looking good, plenty of fish in the area and surely it was only a matter of time before some Bream moved in.  Half an hour later and amidst all this action I’d failed to notice the wind had completely swung round to a north easterly and was starting to bump the boat around.  The forecast had promised winds from the west all day so this wasn’t at all in the script, the forecast had threatened showers too but could we trust it?  The sensible thing was to move the boat just in case so a few minutes later we dropped the weights in another bay sheltered from the new wind.

I used the same methods here but bites weren’t so quick in coming which at least gave me the chance to make a cup of tea.  After a while the tip on the maggot rod began to rattle again and I began to catch a few small silver fish.  After an hour on this spot the maggot rod bent over properly and I was into my first Bream of the day, it wasn’t that big but required the net and the curse was broken at last!  On the next cast the same rod produced another, bigger Bream and before I’d unhooked that one the sweetcorn on the other rod was taken by the smallest Bream in the Broads.  I switched both rods to corn and the bites kept coming, six out of the next seven fish were Bream averaging around 1 ½ pounds each, the net curse was forgotten.  While this was going on the wind dropped to almost nothing then a few minutes later picked up again from a westerly direction.  We were comfortable and nothing threatening showed on the horizon so we stayed put but a fishless half hour passed with barely a rattle on the tip.  Time for another move. 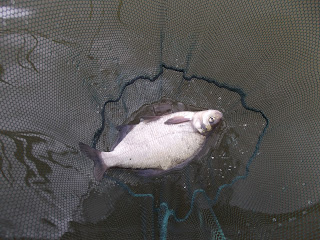 A third spot gave Shelley another angle for her camera and I started again from scratch.  Bites were slow to begin with and never came as regularly as the previous two spots.  I’ve caught plenty of Bream in this area in the past but today I only managed Roach and Rudd.  Bream may well have moved into the swim as the light faded but we didn’t find out because by then we were motoring back to the slipway.  The day finished with a seafood medley washed down by a couple of pints of ‘Ghost ship’ in my favourite pub in Norfolk.  While we were tucking into this the rain came and emptied the beer garden.  Luckily we were inside watching through the window, our timing had been pretty good today.
Posted by Michael Hastings at 13:16 No comments:

Has June always been stormy or is it just recent years?  If, as I think, it’s a fairly recent phenomena; then perhaps it’s further evidence that a bunch of rich men have fucked the planet up?  They don’t give a shit because they’ll be dead soon anyway.  Whatever, today was as rough as guts, heavy rain and gale force winds, clouds as dark as Theresa May’s soul.  Ideal for chucking lures around in a boat, possibly not.  Fortunately the forecast said the clouds would break in the early evening and we might even see the sun.

I met Giles and we were afloat by 1900, drifting with the still strong wind and casting lures as we went, the sky was miraculously and mercifully clear but there was more gloom on the horizon.  Away to the north a flash of lightning and rumble of thunder, to the south a rainbow gives Giles an unlikely halo.  The lake looks fantastic, full summer greens lit by the longed for sun but it doesn’t last.  Cloud and gloom skids by but it stays dry, all things considered these are pretty good conditions for a late spring Pike.  As Giles was my guest I was on the oars, which was going to be hard work and would leave no time for snapping photos of the scenery, no matter how nice.

Tonight the Pike had read the script, kind of.  We had plenty of hits, as usual Giles getting the most but the Pike just wouldn’t stay hooked.  We both had fish come off quickly and as the evening progressed we got them ever closer to but not actually in the boat.  One jack which Giles managed to get fairly close threw the lure in the process of leaping a good yard clear of the water.  My killer Rapala which done the business last year provoked just one response early on while Giles had hits on a variety of lures, notably a spinnerbait.

Having enjoyed reading about Mr Lumb’s surface fishing I’d become inspired to chuck a topwater in the box.  I’ve only ever caught a handful of Pike on surface lures; I’ve rarely had the confidence to persevere for any length of time but now was the time to put it right.  I’m not even sure what lure I was chucking out either.  I think I bought it via the old P&P forum, it may have been made by Dave Greenwood from whom I got a few good fish catching lures but I have a feeling this one was made by Graham Slater?  Anyway I began chucking it around and working out how to fish the thing.  After a handful of casts I felt a sharp tug which may have been a take?  A bit of missing paint seemed to back this up.

The wind was still blasting which made controlling the boat and the lures a bit tricky and the row against it was a bastard but we kept going.  We worked out the best way to fish was to lower a mudweight which controlled the drift but even this eventually saw us too close to the bank.  I tried a couple more lures but ended up back on the surface thingy simply because I was enjoying fishing it.  I worked out it seemed to feel right casting downwind and bringing it back against the waves with a slowish, steady retrieve.  A boil on the surface signalled the fish agreed and I was attached to a Pike for long enough to actually think I might boat it but no!

A few casts later it happened again, I didn’t see the take but felt the thump and set the hooks, my luck held and we actually needed to use the pliers.  Just a Jack but at least we’d boated a fish.  We had a cold beer to celebrate and watched a bright red sun sink to the west.  After a few more minutes of firing the topwater out I decided I’d had enough and began a very slow, arduous row back against the wind.  Hopefully Giles would be able to move a fish or two on the way?  Sadly not, one Jack torpedoed out but missed the lure and vanished.
By 2200 my arms ached but we were back at the boatyard and it was still light enough to pack up without a torch.  Despite being thoroughly wind blasted it was a fun night that will hopefully be repeated soon. 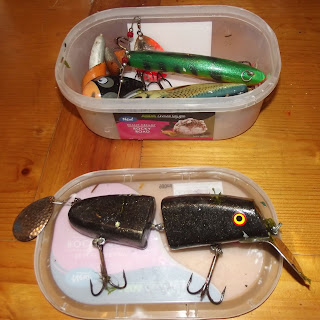 This is the unidentified topwater lure.  The tackle boxes are great, they’re really cheap and come full up with free ice cream!
Posted by Michael Hastings at 15:50 No comments: