New moon, rising pressure and cold weather to come later in the week, today should be a big fish day!  The only downside is a westerly gale which renders my first choice venue out, I just wouldn’t feel safe therefore wouldn’t relax and enjoy myself.  Even on my second choice there are parts of the water that are exposed and uncomfortable.  I suppose I could have sorted out my bank fishing kit but Pike fishing without a boat feels like having a limb chopped off these days.

So by 0715 I’m in position with a high wall of reeds behind me giving shelter from the westerly blast, at least the sky is clear and I won’t have to brave any rain today.  All three rods are set up with my normal float leger rigs, the float is something I’ve mentioned before, the best I’ve used for boat fishing as it rides the waves and is immune to any boat swing, always staying visible.  They are home made, cheap and easy but definitely not my design and I don’t know which clever person to thank.   I punch a joey mackerel across to the far bank, cast a smelt along the near margin and chuck a half herring in mid stream then settle down in the boat with the first brew of the day.  This is as close to a ‘banker’ spot as I know on this water, hopefully it shouldn’t take too long. 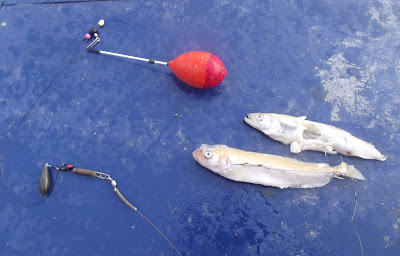 There’s a heavy swirl close in to my left, followed by a hissing sound.  Yes a bastard otter which isn’t pleased to see me and I’m even less pleased to see its furry back.  This is followed seconds later by two cubs swimming with their ugly whiskered heads poking out of the water.  They carry on towards the boat without a care until I shout “Feck off!” and they dive to catch up with the parent.  Thankfully they don’t hang around but what affect will they have on the fishing today?  I’ve noticed two dead swans on this stretch this winter, I know these birds fight and kill each other and it seems this would be the likely cause.  However I’ve seen Youtube footage of an Otter dragging a goose down river so could one tackle a swan?

Barely twenty minutes pass before the float above the mackerel is sliding downstream and I’m on my feet, a little nervous because today is a big fish day!  The strike connects and the rod takes on a decent bend but there isn’t a great deal of weight there.  A nice double figure fish is soon in the net, a good start but I’m greedy, I want more.  The wind is still raging which makes casting a fresh mackerel  back to the far bank ridiculously easy then I settle down in relative comfort again. 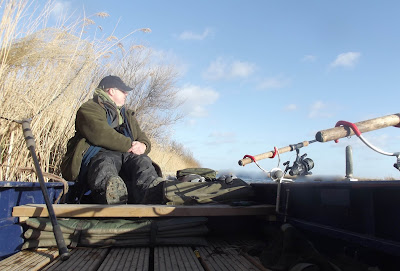 Another hour passes and I’ve got itchy feet, it’s time for a move.  My plan is to stay on the leeward bank and work my way along the stretch.  Before I can begin tidying up the Mackerel is on the move again and I wind down to a head shaking, tip rattling, bait stealing jack.  Not what I want on a big fish day but I’m never disappointed when any Pike takes my bait, at that moment when the float slides off it could be anything…  I’ve got a lure rod with me today and throughout the day I cast a selection of artificials around the swims; curly tails, shads, a Salmo crankbait that is well battle scarred and a favourite spinnerbait.  This water should respond to lures but it rarely does.

That fish delays my move but not for long, by 0930 I’m anchored up a bit further downstream, the sun is well and truly up now and it’s a lovely clear winter day, apart from the wind which is roaring still, making me look nervously at the trees behind me from time to time.  The same three baits are spread around the swim and I sit back anticipating a quick take.  It doesn’t happen though so I make a big dent in my food supplies and have another brew.  At 1030, just when I’m thinking of another move, the herring is heading upstream but I make a complete cock up of the strike and the fish gets away with my bait.  Before I have time to recast I have another take, this time on Smelt and on this occasion I manage to set the hooks properly then bring another small fish to the boat.  Once again this little burst of action delays my move, I give it another half hour before lifting the weights again.

My third swim of the day is on a slight bend with a nice overhanging tree opposite and I soon have the same three baits positioned; near, middle and far.  This time it only takes fifteen minutes before the mackerel is picked up, I wind down quickly and feel a tap and rattle with little or no weight behind it.  This quickly becomes absolutely no weight as the obviously small Pike makes its escape with my bait.  I spend another hour on this enticing looking spot before another downstream move, an hour on this spot produces the sum total of bugger all, we’re now into the early afternoon and it’s time to start making my way back to base.

By 1400 I'm settled once more, the same three baits scattered across the stream.  The plan was to give this spot an hour then move back to my original ‘banker’ spot to watch the sun go down.  The wind had lessened a bit by now but is still making its presence felt, the stove roaring in gusts as I toasted the last of my sandwiches.  For the third time today I'm on the verge of moving when a float starts moving, the far bank mackerel is the one to go again.  The culprit is a fish of about seven pounds or so which fights harder than it should and manages to tangle one of the other rods.  With the fish unhooked and released I turn my attention to the tangle and while unknitting braid I feel a sudden tug!  The bait still in the water has been picked up, I have no option but to just hang on as the line tightens and fortunately (?) the fish drops the bait.  I hardly have time to ponder this when the smelt on my third rod is away and this time, with nothing to hinder me I manage to set the hooks and steer another nice fish into the net.  It’s only when the commotion is over that I notice the wind has dropped away considerably, had this contributed to that little feeding spell? 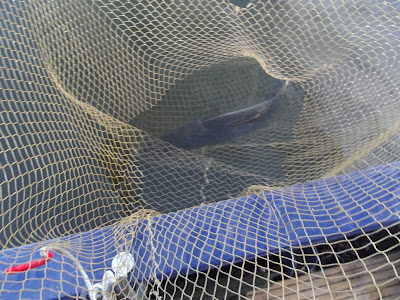 Despite having three takes in ten minutes I still want to spend the last hour on the banker spot so after another short move I’m settled again with the three deadbaits soaking and the lure rod buzzing between them from time to time.  I’m alert, expecting something as the light fades because it’s often the best time of the day but on this occasion it doesn’t happen.  A Sparrowhawk patrols the far bank which is always an interesting sight but this is the last predator to put in an appearance today.

I had a good feeling this morning, today should have been a ‘big fish day’ but it hasn’t happened.  Maybe my location has been wrong, the big fish aren’t where I hoped to find them, perhaps they were further down the stretch in the wind battered areas?  Maybe the Otters scared the wiser old fish away?  Perhaps with these bastard creatures about the big fish just aren’t there anymore?  I hope that isn’t the case but I worry.

This day is typical of my mid winter fishing, It’s become routine, load and launch the boat, drift downstream stopping here and there until I’ve seen some clues or even better, seen a float move.  Then I plot up and fish with deadbaits and lures.  So far so good, the plan has been working and I’ve been catching a few Pike with a pleasing average size but no sign of the BIG fish I think may be present.  It’s all very nice, enjoyable fishing and it’s convenient but if I’m honest it scratches an itch but doesn’t relieve the craving.  I know where I want to be fishing but things are tough enough there at the best of times, I really should wait till the conditions are a little more in my favour.
Posted by Michael Hastings at 12:47 No comments: