I’ve had another couple of trips to the Valley since that Carp pulled my string.  The first was an attempted repeat of that initial success, fishing the same swim with the same methods on a cold, breezy evening.  The day had been warm and bright but by the time I got to the water in the evening it had changed completely, taking me by surprise.  The water was so choppy I could hardly see my float and most of the time I had no idea what was going on with it.  The boilie rods didn’t move either; I blanked and to misquote Fred J, was glad when I’d had enough. 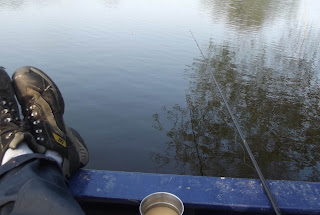 A week later and the weather had been hot for a few days, I decided to take to the water and launched a punt.  The lake was gin clear beneath me, with new weed growing quickly I rowed slowly along the lake, noting clearer areas and looking for fish.  Through the polaroids I could see dense clouds of silver fish and tell tale splashes in the reeds told the tale, these fish were starting to spawn.  Pike were also in attendance, smashing into the spawning Rudd and Roach from time to time.  There was a spot I fancied and without anything better to go on I tied up and began fishing.  A pop up boilie was swung across to an overhanging tree and baited with a few pouches full of pellets.  On a second rod I float fished corn over some Expo close to the punt.  Float fishing for Tench from a punt, does fishing get more idyllic?  Well yes, actually catching one would be a massive improvement!  I’d not long started when two good sized Carp cruised by then vanished into deeper water.  This gave me a bit of confidence but I didn’t see them again.  Despite the spawning going on around me I caught Rudd and the occasional Roach steadily, so much so I considered switching to a fake bait to slow things down.  Instead chucking the rig up a tree brought things to a full stop. 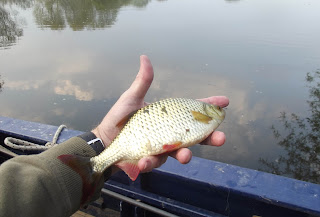 The weekend came around again and with an afternoon free I drove into the Valley again.  I wanted to get out in a punt once more; with a bit more time surely I could find some fish?  The weather intervened with light rain, turning to steady rain, becoming heavy rain and I spent the time huddled under the oval, staring at motionless indicators.  My rods were sat on a pod which in theory should be straight and kind of symmetrical but never is.  Every now and then the rain would ease and I’d wind a boilie rod in and chuck out the float rod.  Rudd of all sizes were hammering the sweetcorn which rarely made it anywhere near the lake bed and I soon got bored with catching them.  Today I didn’t know if I was within a mile of any Tench or Carp. 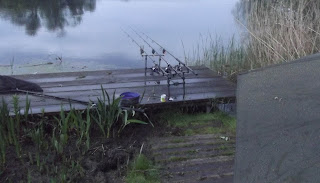 After a flying start my warm weather fishing has settled into fruitless normality.  Searching for a handful of Tench and Carp in twenty odd acres of weed and snags is just the kind of daft fishing challenge I like.  To be successful I either have to have everything in my favour so I can locate some fish in a place I can reasonably fish for them; or I have to be incredibly lucky. Or both.

Posted by Michael Hastings at 14:03 No comments:


I left home around midday and after a quick pit stop at a tackle shop, arrived at the water about forty five minutes later.  The Charlatans had been playing in the car but as I walked to my swim Skids “Into the Valley” was whirling through my head, something about the venue?  The day was horrible, murky and damp which had already brought a change of plan.  I had wanted to fish from a boat but this was not a day for being exposed to the elements, even though I wouldn’t think twice in winter?  So once again I was fishing from the bank and found myself putting together a rod pod of all things!  There was no science behind my swim selection, I picked the most unpopular, least fished one on the lake but a wise friend had tipped me off to some good fish coming from here in the distant past.  Whatever happened at least I’d enjoy the peace and quiet.

I’ve named this water ‘The Valley’, for reasons that are obvious if you know it but hopefully you don’t.  It is home to a small number of large Tench and a handful of Carp but is stuffed full of silver fish which will demolish a carpet of particle baits in no time at all.  Two years of persevering with this approach has been fruitless so I have reluctantly decided that my best chance of a big Tench is to use methods more suited to the Carp, basically large 8 to 11mm pellets and boilies.  I’m aware of a couple of other anglers that target the Carp on this water but it doesn’t suffer from the type of angler that ‘carp waters’ attract.  I won’t have to listen to monotonous rambling about the cost of the latest ‘Basia’ and I won’t have to hear what Danny Fatarse has said on his new DVD.  Best of all, none of the fish have silly pet names.

I spent some time casting a bare lead around to check for weed, muck and other obstructions, after landing nicely a foot short of the far bank I clipped up and marked the line.  By 1315 I was fishing with a couple of rods; I swung a helicopter rig along the margin to my left where it landed in the shadow of a bush.  This was baited with a fishmeal boilie tipped with fake corn and fished on a 5” hooklength.  I baited the area with a few handfuls of mixed pellets and ten boilies.  On my second rod I used the dreaded chod rig and baited it with a pineapple pop up, this was cast to the far margin then I used my newly acquired catapult to spread about twenty boilies over the area.  So now to my third rod, I could have sat it on a buzzer but fancied something different so used a waggler set up and fished corn at the bottom of the marginal shelf.  I put five tennis ball sized lumps of Expo in and sat back to wait for the inevitable assault by the silver fish.

The afternoon was unpleasant enough for me to give the oval brolly a rare outing, it was a horrible overcast day with a north westerly wind whipping in the kind of drizzle that you barely notice until you realise you’re soaked.  I decided it should be called ‘wet air’ which reminded me of an essay I’d been given at school about thirty five years ago, “the disadvantages of having wet hair”.  It was raining and my hair was wet so the teacher sent me into the corridor to dry it, when I returned he punished for me for being late.  Teachers were able to get away with being sadists in the eighties and this bastard really had a chip on his shoulder, perhaps being christened Stewart Blewett had something to do with it?

So with everything sorted I relaxed under the oval and enjoyed the sights and sounds of the East Anglian countryside.  Skylarks were in good voice and I enjoyed watching Swallows and Martins for the first time this year.  The drizzle came and went, the sky brightened up for a time and something fishy splashed on the far bank but what?  My float had dipped slightly a couple of times but I’d been slow to react, now it was mostly motionless which was a surprise.  An hour passed in blissful tranquillity, the only sound was bird song and the drone of bees.  There seems to be loads of bumbles about this spring which can only be good (not to be confused with Bumble, there is only one David Lloyd).  I heard my first Cuckoo of the year and saw it on the wing later in the afternoon.  A Warbler perched in the reeds almost within touching distance but I knew it would be pointless reaching for the camera and I’m not sure of the variety; Willow, Sedge or a Chiffchaff. Meanwhile the alarms were still silent and the float only gave the occasional half hearted wobble or dip, when I remembered to look at it at least.

At around 1445 an alarm beeped… and then again… a liner?  Was my line was tightening?  Then ‘Beeeeeeeeeeep…’  I found myself with a bending rod in my hands, it was the pop up cast to the far bank and I was gaining line on something kiting to my right.  The occasional surge took line from the clutch so whatever was on the end had a bit of power too it.  I realised I had a proper shake on and a thumping heart, it’s been a couple of years since I’ve had a rod roar off like that and I’d been totally startled. In comparison a Pike makes off with the bait in a far more gentle manner and my heartrate increases gradually.  As the fish came closer so it rose in the clear water and I saw that, inevitably, it wasn’t a big Tench but a long Common carp that had the bright yellow pop up clearly pinned to its lower lip. Still I was nervous because I was yet to land a Carp from the Valley and I really wanted it in the net, I was glad I’d brought the proper 42” one too.  After a bit of typical marginal plodding the fish rolled over and I managed to draw it into the net, where it stayed while I got mat, scales and camera ready.

The hook popped out easily and despite being quite a long fish the scales told me the fish was a couple of pounds lighter than I’d expected.  Usually I have a plan for self take photos but had been so confident this afternoon that I hadn’t bothered.  This partly explains why the pictures were poor, also Carp are a bugger to hold, I keep wanting to slip my hand up the gill.  With the fish returned I recast the rod and pulted out a few more loose boilies, then sat back with a satisfied grin.  This fish would not raise any carp angler’s eyebrows, most would hardly look twice at it but the whole experience thrilled me and that’s why I go fishing. 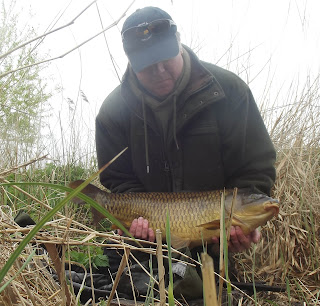 I’d love to be able to report that I’d finally cracked the water and this was the beginning of a dream session of hauling in Carp and Tench but of course this wasn’t the case.  That was it for the day as far as fish were concerned as not even the float rod brought any proper bites.  Nonetheless I enjoyed the afternoon in the countryside though it was mostly spent huddled under the oval out of the northerly drizzle, with the occasional chat with the friendly neighbour who’d joined me.  A pair of Buzzards circled though not on thermals, it was too cold for that.  A Sparrowhawk whizzed by and landed in the bush a few feet to my left, this time I did manage to get the camera out but the result was… well, crap.  I didn’t have a good camera day. 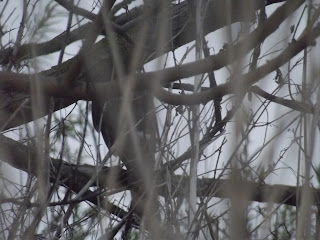 I had intended to fish well into darkness but by 2000 the temperature had dropped considerably, I didn’t feel confident of catching anything else and to be honest I’d had enough.  As soon as the oval was packed away the drop in comfort levels was considerable and for once I didn’t dawdle when packing the rods away.