A weekend in June

So once again my attempt to catch a huge spring Tench has resulted in abject failure, indeed my attempt to catch any Tench at all has been fruitless.  I have caught loads of fish of other species but not the ones I’m targeting.  It’s the same every year but I refuse to compromise and settle for artificial fishing, I enjoy what I do regardless and one day I will be successful and it will be all the sweeter for it.  I will keep on trying throughout the summer, even though the spawned out fish will be down in weight.

The opening of the river season gave me the chance to do something different so the Purple Princess and I headed for Norfolk for a weekend of camping, Pubs and the chance to actually catch a species I was targeting for a change.

Saturday dawned but we were in no hurry to get up and out of the tent.  A cup of tea and a breakfast fried on the stove got us fuelled and ready, a visit to the tackle shop topped up our bait and supplies then we headed to the ‘Greyhound’ for lunch and a welcome pint of ‘Ghost ship’.  With full stomachs we made our way to the slip and I was soon opening up the engine and cutting through the Broadland waters.  It was lovely to be back, last time I was here the trees were skeletal and the reeds were creamy brown, now everything was green and lush.

By early afternoon I’d dropped the weights in a secluded bay, away from the worst of the summer boat traffic and soon had two feeder rigs out into a clear channel between thick weedbeds.  I used open end feeders on helicopter rigs, hookbaits were maggots or corn on short hooklengths.  The feeders were stuffed with a mix of Expo, brown crumb and crushed hemp which is the mix I use for almost everything. This is a favourite summer spot and one that almost always turns up a few Bream, my target species for the day.  The weather was kind to us; warm, bright and dry with a brisk north easterly wind but the wall of reeds gave us more than enough shelter.

The fishing started off slowly but after a while bites began to come steadily; Roach, Rudd and the occasional Perch homed in on the maggots but the corn on the other rod remained relatively untouched.  I began to wonder if I was over confident, had I jinxed myself?  Would the Bream laugh at my attempts to catch them?  Would this trip be another failure?  Whatever, the surroundings were idyllic and there was plenty to look at when the tips were still.  Most of the familiar feathered residents of the Broads put in an appearance, we heard the Cranes but didn’t see them and the Bittern were as elusive as ever.  A couple of birds flew over that I didn’t recognise at first, they looked like anorexic white ducks but when one flew close the upturned beak gave the game away.  Once home my bird book confirmed they were Avocets.  Later there were fluttering wings and a flash of colour, at first I thought it was some kind of small bird but no, it was a famous Swallow tail Butterfly.

After a couple of hours the sweetcorn rod started trembling and eventually pulled round properly.  I pulled into my first Bream of the day and for the first time this season I’d caught the fish I set out for.  After that I caught a few more though the bites came and went and I never felt the fish were there in numbers.  The biggest Bream would have been between three and four pounds but were lovely dark bronze fish, just as Broadland Bream should be.  It occurred to me that I hadn’t caught any of these dark coloured fish or any bigger ones since the Prymnesium outbreak three years ago.  I think a generation of proper Bream was wiped out in 2015 and now the survivors are growing on and growing bigger.  With all that has been learnt since this last catastrophic fish kill the future looks hopeful, thanks to the persistence of anglers led by John Currie and PAC along with the EA and scientists at John Innes centre. 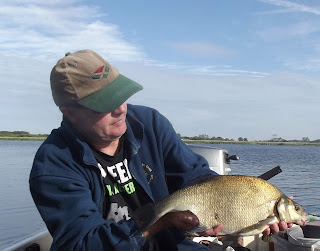 By 1900 we fancied a change of scenery, the boat traffic had calmed considerably allowing me to visit an area I would avoid during the day.  Once settled bites came straight away on both maggots and corn.  I caught more Roach and Rudd and yes I caught more Bream too though these were mostly silvery skimmers up to a couple of pounds or so.  By now the wind had died away and we were perfectly positioned to enjoy a fabulous Broadland sunset, reflected in the now calm water.  With the colours changing by the second the Princess was busy with her camera, capturing one of nature’s great displays that most people don’t even notice.

By 2130 we were both tired and the temperature was dropping quickly so we tidied up and cruised slowly back to base, the sky was still awash with colour.  It was 2230 by the time the boat was back in its space and I hadn’t even needed the torch. 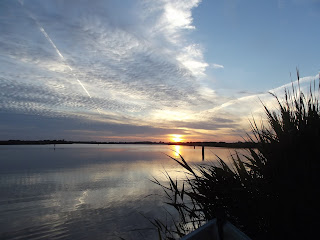 Another night in the tent, again we were in no hurry to go anywhere so it was another fried breakfast and another delicious pub lunch.  I pointed the car in the general direction of home, stopping on route for a walk around a nature reserve and an ice cream.  Back at home I turned the TV on just as Adil Rashid walked to the wicket, it looked like the game was gone and with it our chance of a whitewash.  Enter Joss Buttler and one of the greatest ODI innings I’ve ever seen, seeing England home with a wicket to spare!  Apparently there was a football match too?

Posted by Michael Hastings at 13:18 No comments: