I had hoped to be fishing all weekend but I’d forgotten a prior engagement.  Friday evening saw Mr Hill and I visit the capital to see a punk band called ‘Fucked up’ perform in a sweaty basement club.  It was a great night out and a really good gig.  Saturday morning saw me highly distracted, I parked in front of the tele at 10:55 and I didn’t move for over two hours.  By this time England had won an exciting test match by 31 runs to take a 1-0 series lead against India.  Once I’d caught my breath I started to sort some tackle out.

By 1730 I was settled and fishing with three rods.  Previous exploration had revealed a nice clear area amongst the weed beds and I’d already baited this spot up with two kilos of mixed particles by boat.  The clearing was big enough for two rods so two pop ups fished on chod rigs were chucked on the spot.  I don’t really like chod rigs, I hate seeing the lead so close to the mouth on the rare occasions that I find myself playing a fish.  However needs must, it is a good rig for weed fishing also I know the hordes of Rudd will try and eat even a boilie, if this happens there is little chance the bait and hook can be dragged off into weed.  The third rod was my preferred helicopter rig, baited with a Tiger nut and fake corn.  This I dropped into another clear spot in the margins.  With the rods out and the bivvy sorted all I had to do was sit and relax.  Locating the larger fish here has proved very difficult and if I do find them they could be miles away from a suitable bank fishing spot.  I don’t like the ‘bait and wait’ approach but at the moment it feels like there is no choice.

It was a hot day but here by the water the breeze kept me cool.  It was lovely just chilling out and watching the bird life; the Heron is a regular visitor but the Egret less so.  Sometimes I see a Bittern but not tonight.  The Princess joined me at dusk and we spent a lovely evening drinking tea, putting the world to rights and watching the clear sky fill with a thousand stars.  We saw several shooting stars and I know our wishes will come true.  The conversation was good, at times like this I almost forget I have rods out; unfortunately nothing appeared to remind me.  A crescent moon rose around midnight and we were in the sleeping bag shortly afterwards. 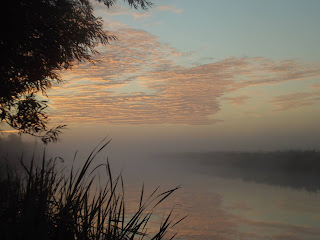 My bladder woke me around 0500, the dawn sky looked beautiful and while I was up I recast the close range rod.  I considered sitting up behind the rods but the lure of the sleeping bag won, it was another couple of hours before I woke up properly.  By 0800 I was sitting behind a float rod but after fifteen minutes and a dozen Rudd I was bored, so back to the boilies.  I knew my best chance was over now but was still lovely sitting in a remote part of the countryside, watching the natural world progress, this morning butterflies and dragonflies were prolific. 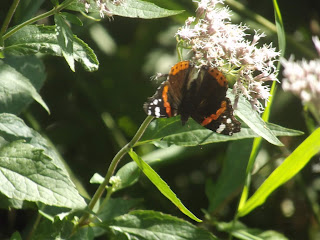 By lunch time we’d had enough, the heat was getting to me and I needed a toilet I could sit on.  As I tramped back towards the car a Buzzard circled, mocking me with its shrill call, maybe from that height it could tell me where the fish are?  I suppose I could try fishing easier waters but that would feel the same as catching the Rudd on this place.

It’s August now and time is running out for my summer season which has been as frustrating as it has been enjoyable.  There is still a little bit of time and I may have a little luck and find some of the fish I’m after.  However I find myself looking forward to the autumn and Pike time.  This will always be my first love, in comparison it seems simple and I’m well within my comfort zone.  But before then if I could have just one more opportunity…

Posted by Michael Hastings at 12:34 No comments: