To be honest not catching Tench or Carp was becoming tedious so I was glad of a cooler spell as I felt comfortable fishing for Pike with lures and I was well up for it.    Isaac and I had agreed an afternoon out in a boat but the forecast was dodgy to say the least, a high chance of light rain but how light?  In the end we said stuff it and loaded the car, the kit supplemented by waterproofs in case it got really bad.

We set off from the boatyard at 1600 beneath damp, murky skies, plan A was to cover water and find fish so I took the oars and Isaac held a rod.  The ‘Angry bird’ worked in the killing zone, just sub surface and above the weed, creating a nice wake, this lure has worked very well in the past.  The bulging lure was hypnotic, I kept concentrating on it and forgot to look where I was going but Isaac steered his lure around most of the weed clumps.  We covered water steadily for forty five minutes and just when confidence started to seep away, Isaac’s rod thumped over.  A nice fish fought hard but Isaac was in control and it was soon in the net and unhooked in the water.  We rowed on a way then turned around to go back over the productive spot but hadn’t got near it before Isaac was in again but this time the hooks didn’t hold. 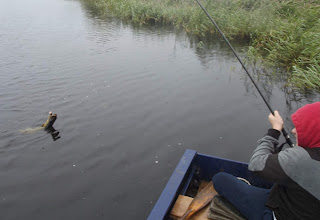 With a couple of fish in caught the same general area it was time for a change of tactics and time for me to have a cast or two.  We trolled back to the top of the wind and the light south westerly pushed us along on a nice slow drift.  Now casting, Isaac continued stuck with his ‘Angry Bird’ while I chose a Zoota Wagtail, one of my go to lures in clear shallow water.  We hadn’t drifted far before a Pike slashed and missed my lure.  A bit further down and my rod thumped over again and this time it stayed on, another small Pike unhooked in the water.  The drift was slow and I needed to row back upwind a couple of times to keep us on the right line but it was worth it as the next three drifts brought three more Pike to my Wagtail as well as a couple of other fish moved.  Right at the end of our last drift Isaac was in again on the Angry Bird and brought his second fish to the boat. 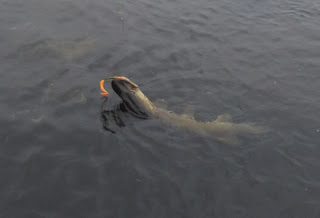 By this time the drizzle was becoming heavier and we made a unanimous decision to turn round and head for home.  I tidied my gear away and Isaac trolled while I rowed back.  Back into the productive area and a Pike swirled at the lure but missed, would it try again?  A minute later the rod hooped round, whether it was the same fish we’ll never know but it was certainly the biggest of the day.  It required the net for sure but Isaac declined the camera.  The score was 4-3, would Isaac get a chance to even the score?  No, as it turned out, we reached the boat yard around 1800 but seven fish in two hours was more than I’d hoped for.  A couple of hours fishing that actually went to plan for a change and just what I needed ahead of the Pike season.  Isaac claimed bragging rights as there’s no doubt he caught the biggest today.  That’s it, summer is over, it’s my favourite time of the year, autumn is definitely here now and I’m raring to go.

Posted by Michael Hastings at 14:50 No comments:

The passage of time

Time keeps ticking by, the weeks have turned into months, summer is turning into autumn and soon it will be Pike time.  The years are rolling by too.  I was surprised that I’ve actually been doing this blogging stuff for over a decade.  So long in fact that the medium is becoming obsolete, replaced by go pro, all action, video blogs.  I still prefer words and pictures so will continue in this format when I find myself with something to say, which seems to be less often these days.  It doesn’t matter if it gets read or not, that was never the point to begin with.  Back at the beginning in 2008 I was just trying to keep an online diary for my own sake but that had to change when I realised I was giving too much away!

In 2008 a lot of my blogging consisted of describing fishing trips with my children, or nieces and nephews on occasions.  God how they’ve all grown up!  My foster daughter left home last month; my youngest Isaac starts college in the morning and our Maddie will be heading off to university in a few weeks.  Ten years ago they were bubbly children running around in the meadows as often as they were swinging fish into my chops for unhooking.  Now they are practically adults and fine people they are too, I’m a proud Dad, if a biased one…

I had planned a last holiday before term time started but I left things too late and screwed up on the dates, the holiday had to be shortened to a long weekend break.  We considered tents but the nights are longer and darker now, in the end a houseboat on the Broad seemed a good compromise to me and happily the family agreed.  I was pleased to see my loved ones appreciating and enjoying spending time beside the water in a place I love.  One of my favourite pubs is just a short ride away too and here we enjoyed excellent food as well as a few pints of East Anglia’s finest beverages.  We were treated to a couple of the famous broadland sunsets too, I’m sure the sunrise would have been equally spectacular but none of us even considered rising in time to see it.

Our days were spent out and about; firstly Norwich which despite my hereditary football prejudices I have to admit is a nice city, a good bookshop always helps.  Cromer is a traditional old seaside town which has mostly avoided being spoilt by the kind of tourist tat that afflicts many such places.  However Cromer is famous for crabs and the few crappy gift shops that have crept in exploit this by selling all manner of buckets, handlines and dropnets which can be used to catch and torture the hapless crustaceans.

Finally we visited Great Yarmouth which can only be described as a shithole.  Yarmouth hasn’t avoided cliché seaside crap, in fact the town actively encourages it and tasteless shit seeps from every storefront.  Every gaudy, horrible thing you associate with seaside tourist traps is proudly displayed in Yarmouth and believe it or not there are actually people who seem to like this shit!  I’ve never considered myself a snob but whenever I visit this place I am forced to reconsider…  I don’t like facial piercings on grandparents nor do I like tattoos on children but maybe that’s just me? 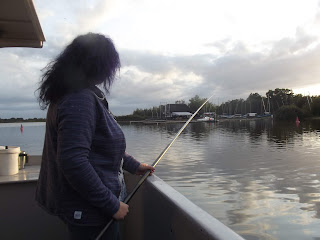 I had my radio beside me throughout most of the weekend and managed to follow another really good test match.  India are ranked no.1 in the world yet somehow the most inconsistent England team I can remember has managed to win the series.  How good could this team be with the addition of a couple of decent batsmen? 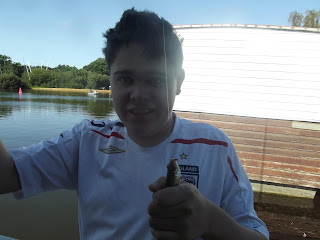 At either ends of the day we fished.  This was mostly from the houseboat itself where we caught loads of silver fish as well as a few Perch.  Both Maddie and Isaac joined me for trips out in my fishing boat in search of Bream; once again there were loads of Roach and Rudd up to 8ozs but we did manage to catch a few of the larger fish for which the broads are famous.  Nowadays Isaac is pretty adept at all fishing for silvers entails and it didn’t take Maddie long to get back into the swing of it, even though it’s been a few years since she’s fished.  Even the Purple princess had a go this time around, usually she’s happy to watch and click away with her camera and had forgotten how much she enjoys actually catching a few. 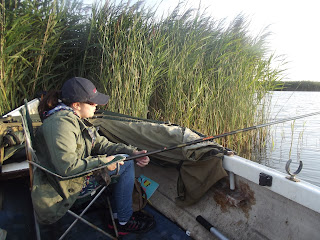 The holiday wasn’t without its mishaps too.  On the first night the princess managed to peel her finger with a razor blade and this required a trip to a surgery.  Whilst Isaac is quite experienced at boat fishing nowadays, Maddie isn’t and on the last evening a moment of panic at the staithe saw both of us tipped out of the boat and into the drink.  Thankfully the water is shallow and the only thing damaged was pride.  It was a timely reminder of how quickly things can go wrong though.  Once dry we discussed what had happened and by the end of the night it was the cause of much laughter. 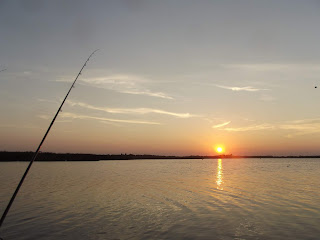 So now we’re all back home now safe and sound, some of us will be returning to routine and normality.  I’ll be ringing up my Pike rods in a few weeks and I’m looking forward to being back in my comfort zone doing what I love most.  However by then my daughter will be living in another county and that is something I’m dreading…