A week in January

2nd January 2019
My fishing year began with a 6am start and a journey east in the damp and dark, thankfully the world hasn’t woken up yet this early in the year so the A14 wasn’t too bad. By 0700 I was afloat on a familiar stretch, the commuters were forgotten. 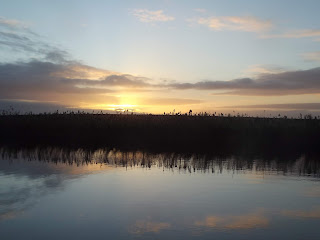 I started off with a long row down to an area that is rarely as productive as I feel it should be and was fishing by 0730. The sun crept above the slight hill in front of me then burst out briefly before being sucked into the low cloud. It had been 5*C overnight and rose to 7*C during the day. Water temperature was 5.4*C at 0700 and as usual was clear as tap water. Wind was light and from the North west so I positioned the punt in the shelter of the reeds.

Tactics for the morning started off with three static deadbaits spread around the swim and on a fourth rod I cast lures around my floats at intervals throughout the day.  At 0818 a mackerel cast along the near margin was on the move, the baitrunner purred but the bait was dropped before I picked the rod up. I gave this swim probably too long but was glad I’d broken the routine and fished away from the 'normal' areas.

The previous evening I had been trying to convince myself to make this more of a pioneering session and stick to areas that rarely get fished.  A couple of fishless hours could have dissuaded me but for once I took a gamble.  I adjusted one of my rods and float trolled down to another rarely fished spot but got there without incident, finally setting up at 0935. This area looked spot on with loads on ambush points which surely must be to a Pike’s liking? Well the answer today was yes! I had two takes; at 1010 (on herring) and 1020 (on mackerel) landing two small fish that fought hard amongst the reeds. When this swim went quiet I rowed further down and had another small fish on Herring almost straight away at 1110.  Half an hour later I was moving again and the float trolling rod was in action once more. I rowed back towards base but stopped short of my normal areas. 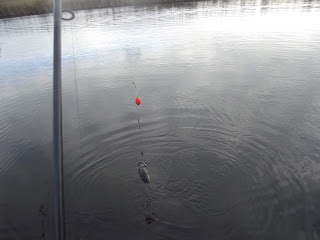 1255 I’d been fishing here for half an hour and was half way through toasting a sandwich when a Herring cast to the far side was moving . This fish felt heavier and fought well but fell just short of double figures. Twenty minutes later a tiny smelt cast across was taken and I hit into what felt like a better fish but they all fight well in this clear water. I unhooked the fish in the water and it was a low double, the first of the New Year. I gave it a while longer before I upped the weights for a final move, settling into one of my regular haunts. I had a take on a big lump of Lamprey at 1430 but this was dropped. I probably could have squeezed in another move but felt sure fish would switch on as the light faded but time looked like proving me wrong. I ended up recasting regularly (never a bad thing) and at 1600, within minutes of chucking a bluey well out of the area  I finally had another take which resulted in a nine pounder that pulled well above its weight and had me reaching for the net. Tonight’s sunset was unspectacular. I gave it another half hour before heading for home.

6th January 2019
On Saturday I spent a fair bit of time getting the fishing gear ready, tweaking rigs and sharpening hooks.  I had everything sorted and ready, if I had any sense I should get an early night in.  If...  Sunday saw me falling out of bed at the ridiculous time of 0430, Richard picked me up twenty minutes later and we started a slow drive to a special place in Norfolk.  Limitations on this water meant we had to share a boat but this would make a nice change, a chance to yarn and have a laugh.

Three hours after getting up I finally cast my deadbaits around the boat, Rich did likewise and we settled back to enjoy the scenery at the very least.  We were under no illusions, we knew were fishing for ghosts in less than ideal conditions but were determined to enjoy yourselves come what may.  We were in the midst of a long period of high pressure, this was yet another gloomy, dull one with no sun and a light westerly wind.  The temperature was the mildest for a few days at 7*c but otherwise poor conditions really.  Would New Moon get things moving?

In short, no.  We moved around a bit, new water to go at always gives the confidence a boost but didn't find anything willing to have a go.  The nearest thing to fishy excitement was when the boat swung and a little line pulled off the baitrunner causing a few seconds of hope that was soon dashed.  Instead of catching fish we enjoyed the wildlife and solitude, drank lots of tea and kept the sarney toaster busy.  We were daft enough to fish until the sun was long gone before commencing the journey home.  I got back shortly before 2000 and was totally knackered.

When Maddie came home from university before Christmas we spoke about doing a little fishing during the holiday as she had enjoyed herself on the Broads this summer.  With her return imminent it seemed we would run out of time but thankfully we both had a few free hours on Tuesday afternoon so hastily made plans.  As we were short on time and the wind was howling I decided against using a boat, for once I actually opted to fish from the bank!  This entailed burrowing into the depths of the shed where I managed to find two twelve foot rods already rigged along with a couple of bite alarms.  I grabbed one of my boat rods too; sharing three rods should be enough for the two of us.

This particular water was unfamiliar to Maddie so after showing her around we unloaded the car and were settled under shelter with the three rods fishing by 1250.  Today was a total novelty as for the first time this year the sun was out and shining brightly, sunglasses an absolute necessity.  No time to reflect on this as one of the rods was away already, a bluey cast along the near margin was steadily moving into the deeper water.  I wound down steadily and pulled into… fresh air! Oh well. 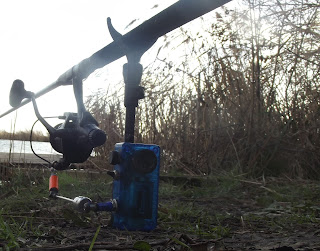 I forgot to mention that today I was actually using a leger rig for which I set up a ‘backbiter’ alarm, something I haven’t done for a while.  There had recently been a spirited debate on social media over the correct way to set up one of these devices.  My set up today wasn’t ideal so I expect the Pike police would be chuntering but no matter, ten minutes later a Pike pulled the line out of the clip and I wound into a nice little fish which charged up and down a bit before I chinned it out.  This one picked up half a herring cast to the far bank.  It did feel a little strange using the longer rod and I’m not sure I like it or need it?  It had been a long time since Maddie last saw a Pike so enjoyed inspecting this one through adult eyes, even a small Pike is an impressive fish when you haven’t seen one for a while.

Although it was nice in the sunshine the wind was fierce today, thrashing the beds of Norfolk reeds, some of the brittle leaves broke off and sailed across the water.  I was glad I dragged the oval brolly out of the shed but regretted forgetting to bring a second chair as Maddie had claimed the one we had.  I spent most of the time standing up and scanning the water so no surprise that I was first to notice Maddie’s float jab and then slide off upstream.  She eagerly left the chair and with me spitting instructions she picked up the rod and wound down.  Despite my advice Maddie managed to set the hooks expertly but as she is only used to catching silver fish these days she was surprised by the power of a nice Pike trying to pull back.  Whether she heard my advice or not Maddie managed to gain control and gradually pumped the fish back to the bank, where I scooped it up with the net.  This fish was in lovely condition and although no monster it was Maddie’s first Pike for nearly a decade and we were both delighted. 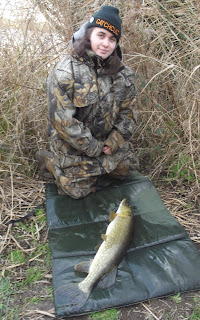 Maddie’s first cast of the day had been perfect but her recast went backwards.  The next attempt was much better but had hardly settled before a Pike was pulling the float across the swim.  Unfortunately this time the Pike didn’t stay hooked although as far as I could tell Maddie had done everything right.  By now the afternoon had clouded over and my sunglasses were now redundant, it felt like the sunshine had just been a dream.  Although we had planned to fish through dusk the clouds looked bruised and threatened rain so with a Pike each to our credit we decided enough was enough.  I quickly packed up before any rain could dampen our day and we were driving back along the track by 1530.

Soon it will be time to get back to the routine and we’ll be heading out on another road taking Maddie back to uni.  Once Christmas is over I usually manage to find a reason for justifying the whole thing and it’s usually spending time with family, this year more than ever.
Posted by Michael Hastings at 12:47 No comments: