I've had two attempts to catch Tench this spring and I've been met with two days of horrible weather.  The first time it was a raging easterly and the second a howling westerly with stinging rain at times.  In theory this can be good fishing weather at this time of year but on this particular water location which is usually difficult at the best of times, becomes near impossible.  In short I was forced to chuck it and chance it then shelter beneath the oval.  In between, when I couldn't fish, we had a week of warm settled weather, such is life.

I fished a bright yellow pop up on a chod rig to the far side, a combination that has worked before. The second rod was  fake corn with an open end feeder on a clear patch of hard bottom amidst weed that is already climbing towards the surface.  This rod was recast regularly but otherwise i sat staring at the water, doing nothing but rarely bored.  I don't know where my mind goes at these times, hours feel like minutes like I'm in some kind of trance.

The countryside is coming back to life, new reeds have pushed a foot and more through the marshy banks and most of the trees are showing a sprinkling of fresh green leaves.  I've seen the first swallows and martins of the year as well as swans, two types of geese, shelduck, crows, rooks, pigeons (that will please the farmers), reed bunting, kestrel, pheasants and partridges.  I saw a harrier hunting over the fields, a bittern landed in the reeds opposite me and vanished before my eyes and I saw hares in their boxing rituals.  One thing I haven't seen is any fish in the net. 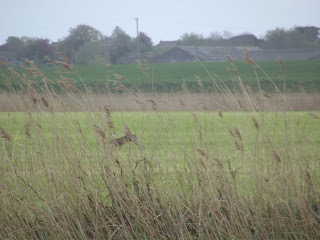 No longer boxing, just a Hare
Posted by Michael Hastings at 09:00 No comments:

A few days ago I attended a work party at a local club lake.  When all was done a friend and I took a walk around the water, discussing amongst other things, how lucky we are to fish such a beautiful water.  My friend, a lifelong passionate angler, has just returned to the UK after several years of living abroad and remarked how much things have changed, in particular the waters available to the angler.  He has quickly worked out that he has to choose between overstocked commercial waters that are crowded with anglers or the less popular natural waters which are far less prolific.  On this choice we are of the same mind, the natural waters will win 99 times out of 100.  We are happy to sacrifice bites for peace, God I never thought I'd ever think of myself as 'traditionalist'.

Things have changed dramatically in this vicinity.  When I was younger I had lots of choice with chains of gravel pits and a lovely little river within minutes of my home.  The river is saddest of all, abstraction has all but killed it, it is little more than a stream now and barely flows if we have a dry summer.  One of the groups of pits was turned into a commercial water nearly twenty years ago, fabulous mixed fisheries are now choked with Carp, the big Tench, Bream and Pike a thing of the past.  The club that controlled the other pits has suffered more than it's share of problems and has lost control of it's biggest gravel pit asset.  The waters it still controls are dominated by Carp, I know that's what people want these days...

The big 'lost' pit has been back filled to make it into a series of smaller pits and another commercial type water is under construction.  I noticed that this complex, which rarely if ever produced thirty pounds + Carp now boasts three or four over forty, where did they come from?  Although nobody is saying so they are obviously stocked fish.  I cannot understand how anyone can derive pleasure from catching a fish of that size that was obviously swimming around in a farm puddle slurping pellets not long ago.  But then again what does it matter what I think?  If the anglers catching these fish are enjoying themselves then good luck.  One man's meat...  However what has this done to Carp angling's "goal posts"?  Not so long ago a forty pound Carp was a monster and literally the fish of a lifetime, nowadays these target figures are meaningless in Carp angling.

It all boils down to choice and if you like Carp fishing or crowded waters then there is plenty.  If like me you prefer quieter, natural waters then the options are being reduced year upon year.  If the day came when I had to join the modern angling scene in order to fish then I'm not sure I'd bother?

So here comes spring and summer when everything fishy should be easier than the winter we emerge from.  It never works out like that for me, I usually catch far less at this time of year.  However what I do catch will be hard earned and appreciated.  A big Tench or Carp that doesn't have a known history and a stupid name would make for a happy summer and in the winter a twenty pounds Broadland Pike will always be a fish to get the heart hammering and will never lose it's "worth" in the modern angling world.

Will I ever see one of these in my landing net again? 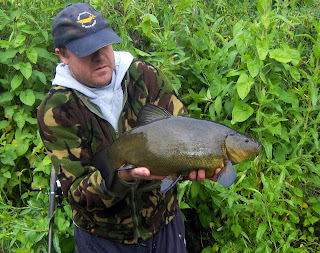 Posted by Michael Hastings at 14:31 No comments: